After 2100, decomposition of peatlands will strengthen climate change 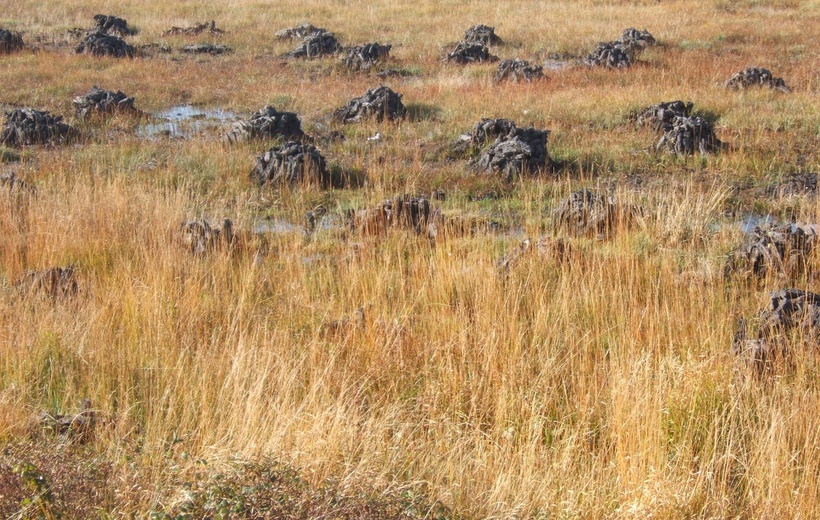 Photo: lumps of excavated peat in piles on an Irish peatland

The world’s peatlands have been a global carbon sink for millennia. The amounts of carbon they contain equal the amount of carbon in the preindustrial atmosphere. Carbon storage in peatlands is the result of the balance between carbon uptake by plants and microbial decomposition. A disturbance of this balance changes the carbon sink potential of peatlands, thus affecting the concentration of atmospheric green houses gases and, in the end, climate change.

In a warmer climate, decomposition in peatlands increases and more carbon is lost to the atmosphere. On the other hand, the accumulation of peat may increase when primary productivity of plants increases due to higher temperatures and a longer growing season length. Studies on high-latitude northern peatlands data have shown that in warmer climates, increases in plant productivity overcome increases in respiration and that these peatlands will probably become a more efficient sink if soil moisture is maintained. This is good news for climate change. However, peatlands at lower latitudes may tell a different story.

In a recent study, the data for northern high latitudes was improved and expanded to low latitudes and southern high latitudes. This way, a more globally distributed peatlands dataset was obtained. From these data, global carbon accumulation over the last millennium (period 850 - 1850) could be quantified. From these insights, future projections of the world’s peatlands carbon sink potential were made.

A shift in future carbon sink potential of peatlands

The shift results from the combined changes in the peatlands at different latitudes. Over time, the balance between an increasing high-latitude sink and a decreasing low-latitude sink changes such that the global sink eventually begins to decrease.

At high latitudes the carbon sink increases continuously far beyond 2100. At lower latitudes, higher temperatures drive increased microbial activity and decomposition rates in the peat and surface litter, but this is not fully compensated by increases in plant productivity. As a result, carbon sequestration decreases. At mid-latitudes, peatlands gradually move into the decline phase when decomposition rises faster than net primary productivity.

Uncertainties in this study are partly due to assumptions that have been made. One of these assumptions is that no changes in deeper peat layers were taken into account. Only the changes in the surface accumulation rates were considered, whilst deeper peat may also warm and provide a further source of carbon release.

According to the authors, the most important uncertainty is human impact. Human impact is likely to be the most important determinant of global peatland carbon balance over the next century. Ongoing destruction of tropical peatlands is the largest contributor at present, and at current rates the losses from this source outweigh carbon sequestration rates in natural peatlands. Reducing anthropogenic release of peatland carbon is the highest priority in mitigation of peatland impacts on climate change, the authors state.