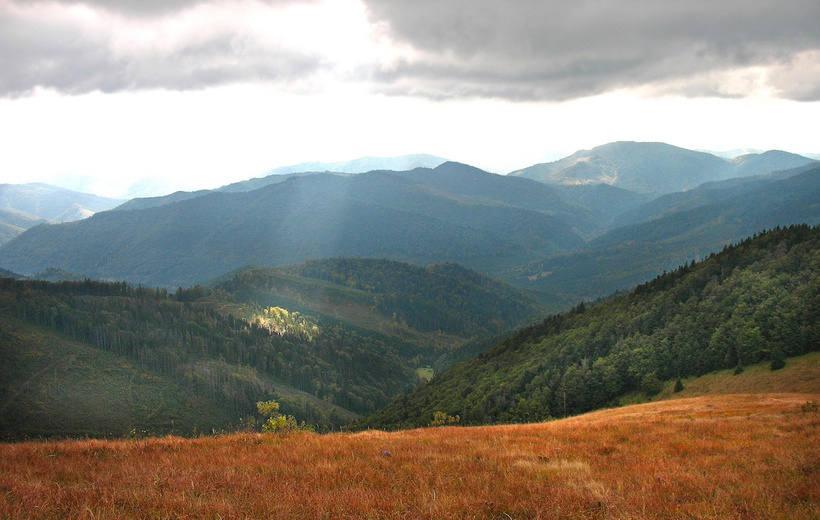 Forests provide a number of important ecosystem services to society. They provide timber and protect against floods, mudflows, and other natural hazards by regulating water flows. Another important service is the accumulation of carbon. The more carbon is accumulated in the trees of a forest, the more this forest contributes to the mitigation of climate change. Global warming will change the composition of forests, and this will affect the provision of ecosystem services. This is not just due to the direct impact of higher temperatures and changing precipitation patterns. In particular bark beetle infestations will also likely increase due to more favourable thermal conditions and higher susceptibility of host trees due to stronger drought stress.

The Carpathian forests as an example

The Carpathian forests are an example of forests where significant changes are expected in the composition of tree species, leading to a reduction of forest carbon sink capacity. These forests are the second largest mountain range in Europe predominantly covered with forests. They span seven countries (Czech Republic, Hungary, Poland, Romania, Serbia, Slovakia, and Ukraine). Because carbon sequestration is the most important climate regulating function in European temperate forests, the Carpathians play a key role in climate change mitigation for the region.

The future forest and carbon dynamics of the Carpathians was studied by means of a forest landscape model including interactions between vegetation, climate, and disturbance regimes. The study area was chosen in Ukraine, in the centre of these forests. Prevailing tree species in this area are European beech, sessile oak (at lower elevations), and Norway spruce and silver fir (at mid-high elevations. Pedunculated oak, European hornbeam, and sycamore maple are also very common for the study region.

The impacts of four different scenarios of climate change were studied: a low-end and a high-end scenario, and two intermediate scenarios. For these scenarios, projected temperature change between the period 1980-2005 and the period 2071-2095 was calculated. This temperature was then kept constant for 500 years since forest tree composition responds very slowly to climate change, although this response is faster due to natural disturbances such as bark beetle infestations. Predicted precipitation changes in this region are minor and thus considered negligible.

A significant reduction of stored carbon

The results show a change in species composition accompanied by a significant reduction of the amount of carbon that is stored in the trees above the ground, the so-called ‘aboveground live carbon’ (ALC). Projected changes after 500 years are such that between 2.1% and 14.0% less carbon is stored in trees above the ground. The additional impact of disturbances such as bark beetle infestations led to an additional reduction of 4.5% − 6.6% stored carbon.

This reduction is especially due to the contraction of spruce forests in favour of hornbeam- and maple-dominated forests, and an upward shift of beech- and fir-dominated forests. Soil water stress in response to increasing air temperatures is an important driver of these changes. These findings are consistent with previous studies on vegetation dynamics under climate change in Europe.

The study illustrates that a strong spruce decline under global warming in European forests may turn these forests into a carbon source and thus reinforce global warming.

The need for foresighted forest management

Therefore, foresighted management strategies are needed to facilitate vegetation adaptation to climate change, with the goal of stabilizing carbon storage and maintaining economic value of future Carpathian forests. The authors of this study recommend that managers consider fostering highly productive tree species where they are expected to be adaptable in the future, and facilitating the adaptation of forest vegetation to novel environmental conditions where disturbances are expected to increase significantly. Active measures, like planting of oak, beech, and fir at higher locations, may facilitate the adjustment process.