The warmer Europe gets, the more precipitation, runoff and river discharge change 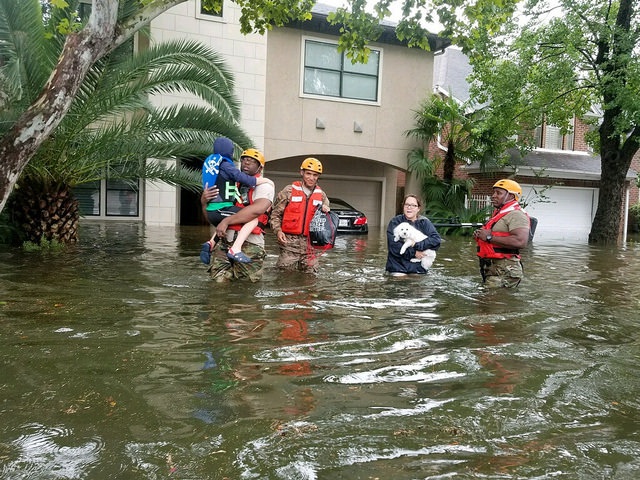 The extremely heavy rainfall in Houston due to Hurricane Harvey may be (partly) due to a warmer climate (photo: Texas Military Department, www.flickr.com)

In a warmer world, hydrological impacts of climate change are more intense. Heavy rainfall becomes more heavy, highest river flows further increase and lowest flows decrease. In addition, these changes affect wider areas. Impacts of climate change at 1.5, 2 and 3 °C mean global warming above preindustrial level have been assessed and compared for precipitation, snowpack, runoff, and discharge in Europe. This was done by using the results of a number of climate models as input for hydrological models. The hydrological impacts in a warmer Europe were compared with the situation in the period 1971-2000 as a reference.

As expected, the snowpack decreases in most parts of Europe.

In other parts of Europe changes in mean annual discharge are less clear. This was illustrated for the rivers Rhine and Danube, and points at contrasting changes in winter to summer: in winter, discharges increase due to higher winter precipitation and earlier snowmelt, while summer discharge decreases due to lower snowmelt runoff from the Alps and increased evapotranspiration.

The need to mitigate global warming to 1.5 °C

According to the authors of this study, their results indicate that it does make a difference on water impacts in Europe if we can mitigate global warming to 1.5 °C. Given the current emissions trajectory beyond a +3 °C warming, substantial emissions reductions will be required to avoid severe impacts on the water cycle in Europe.