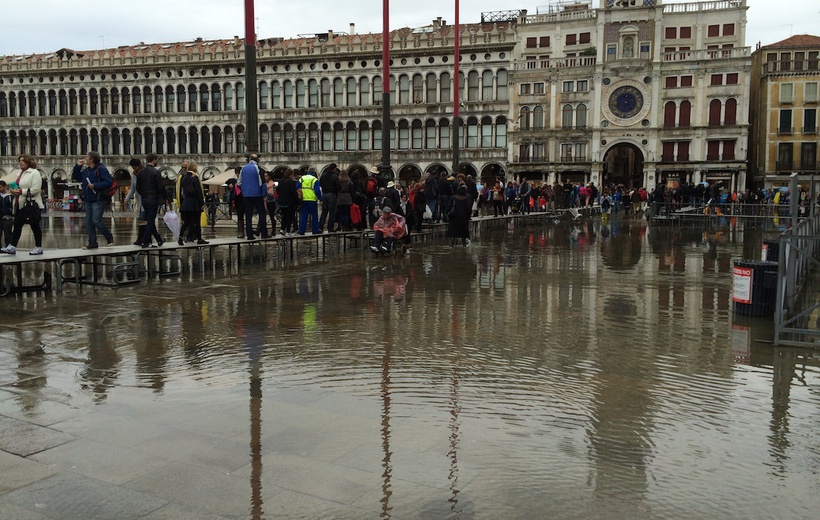 A rising sea and a sinking city

The city of Venice in Italy, one of UNESCO’s most famous World Heritage Sites, is subsiding and absolute sea level is rising. The combination of these two processes is relative sea level rise, the rise of sea level with respect to the subsiding land. Knowledge of relative sea level rise is crucial for the safeguarding of the city. Today, the sea has reached the level of ground floors and is causing dramatic damage to buildings and monuments. Some people have raised the floors and bricked up the lower parts of doors to avoid the penetration of seawater; others have built a wooden dock walkway or a floating platform in front of the door.

The existing tide gauge record of sea level for Venice goes back to 1871. Scientists succeeded in extending this time series back to 1571 by studying the green algae belt on paintings. In a recent novel approach, scientist went even further back in time, to 1350, by studying the submergence level of the steps of water stairs of palaces on the Grand Canal.

From the tide gauge record it was concluded that the observed average relative sea level rise in Venice was 2.5 ± 0.2 mm per year over the period 1871-2014. The average subsidence of Venice and its surrounding land in this period was 1.5 ± 0.3 mm per year. Thus the sea level near Venice has risen by 1.0 ± 0.3 mm per year since 1871, quite comparable to the value of 1.1-1.5 mm per year that was found for the Mediterranean over the past century.

Clue 2: Algae belts on paintings show sea level in the past since 1571

Green algae on paintings were first studied for paintings covering the period 1727-1758. The algae belt is the biological tracer of sea water level. By comparing the algae level in the paintings with the current one, average relative sea level rise was estimated to be 2.3 ± 0.4 mm per year. Second, a comparison was made between algae belts on these paintings of 1727-1758 and a painting made in 1571. This comparison revealed a relative sea level rise of 1.2 ± 0.4 mm per year. This figure is close to the estimated land subsidence for this period and suggests that the absolute sea level rise over the seventeenth century may have been very small.

The submergence level of the steps of water stairs of palaces on the Grand Canal provides an exceptionally long series (i.e. 664 years) of data on sea level rise. In Venice, canals are more important than streets, and the Grand Canal is the main canal with the most magnificent palaces on both sides. The main entrances of the palaces are on the Grand Canal with water stairs, i.e. stairways, leading down to welcome guests and unload supplies arriving by boat. Nowadays, water stairs are fully or almost fully submerged and disappear underwater. The bottom step, in association with the building date, provides a useful proxy to reconstruct the change of relative sea level over the centuries. The advantage is that there are numerous water stairs and they may provide a very long, high-resolution series.

In fact, the results suggest a turning point in the change of absolute sea level for the mid fifteenth century, quite consistent with the literature: sea level must have dropped from a maximum elevation during the Mediaeval Warm Period, when absolute sea level was 12 to 21 cm higher than today, to a minimum around 1730, as a result of the Little Ice Age. Since the Little Ice Age global warming has led to an accelerated sea level rise, which is illustrated by the long-term data set for Venice.