Don’t pave your gardens. We need them to control urban flooding 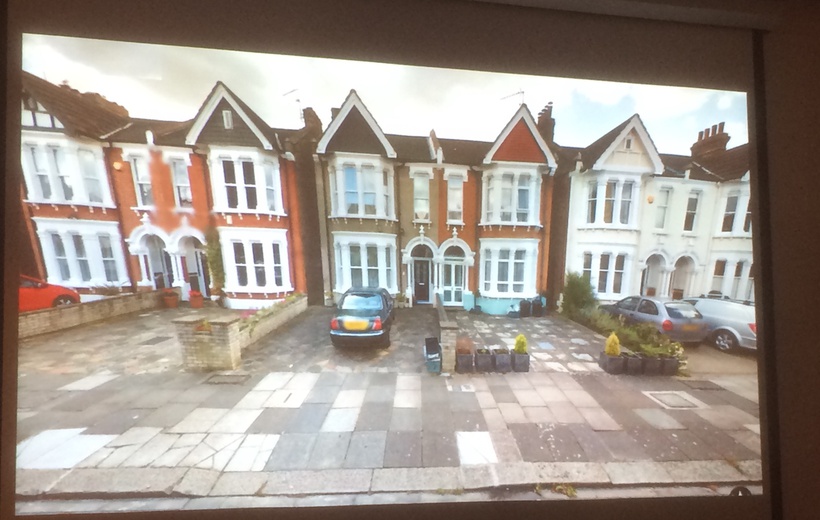 At the ECCA conference in Glasgow experts shared their experience on new ways to manage rainfall to control flooding, such as returning parking lots into domestic gardens (photo: presentation David Kelly).

The Third European Climate Change Adaptation Conference was held in Glasgow in June 2017, focused on “Our Climate Ready Future”. The ClimateChangePost presents a selection of contributions to this conference. This article is the seventh in a series of eight based on presentations given at the conference, and interviews with the scientists.

This contribution was presented by a number of UK urban flood risk specialists including David Kelly of Heriot-Watt University.

The management of surface water has become a major challenge for many cities around the world. Factors such as rapid population growth, increased urbanisation, deficient infrastructure, and climate change impacts call for new ways of controlling rainwater in urban spaces in order to minimise flood risk. At the ECCA conference in Glasgow experience was shared how to manage rainfall to control flooding.

In ‘traditional’ urban drainage systems rainfall and effluents of households and businesses are discharged through the same pipe. Rainfall discharge volumes are increasing, however, due to climate change and because a lot of green urban space has been paved over the last decades. The ‘old’ pipes are often not wide enough to accommodate extreme rainfall discharge volumes. It is generally too expensive to replace the old pipes by larger ones. Besides, it is not a wise investment to keep on mixing rainfall and effluents of households and businesses, and discharge this ‘grey’ water to a sewage treatment plan. It is better to keep them separate. For new developments Separate Urban Drainage Systems are often built. For the existing urban built area other measures are looked for, including so-called water squares, swales, ponds, rain gardens, and permeable paving.

According to David Kelly (Heriot-Watt University) one land type currently remains untapped in terms of urban flood risk management strategies: domestic gardens. In the UK many people have turned their gardens into parking lots. In Northern England, for instance, 47% of domestic gardens are paved for at least 75% of their surface area. This way a large area is lost for natural drainage in cities. After all, domestic gardens in the UK contribute between 22-36% of the total urban area. The natural vegetation and permeable soil surfaces in domestic gardens help to intercept, store, and infiltrate rainwater where it falls and so provides a valuable asset in terms of surface water management. Yet, this asset is slowly being eroded due to growing urban densification where large areas of gardens have been lost to hard paving for car parking and convenience, and used to construct building extensions.

The loss of large areas of gardens to hard paving illustrates that climate change adaptation is everyone’s responsibility. Domestic gardens present a potentially valuable tool for helping control surface water within the urban environment. Kelly stressed the importance of finding the right strategies to engage householders and encourage social motivation towards garden adaptation. We need to rethink our gardens, he said, and encourage people to take action themselves, by introducing incentives like storm water fees, tax credits, or providing technical and design support. Also, we must communicate to citizens in numbers they understand. Tell them that 1 m3 of water equals 67 full buckets, for instance.

These new ways of controlling rainwater in urban space are a different approach than people are used to. They call for investments, redesigning urban space where possible, and participation of citizens and businesses. It is important to show that they are effective in order to safeguard future public support. Remarkably, according to some of the speakers at the conference, monitoring these measures to provide evidence of their success is lacking. ‘There is no money available for monitoring’, one of the speakers said, ‘so we don’t know how it works’. This seems to be a weak spot. Without good data on the effect of these measures, how can you improve them or convince people to invest in them or take action themselves? Monitoring should not be at the bottom of the list.