Can we protect Scotland’s archaeological assets along its dynamic coast? 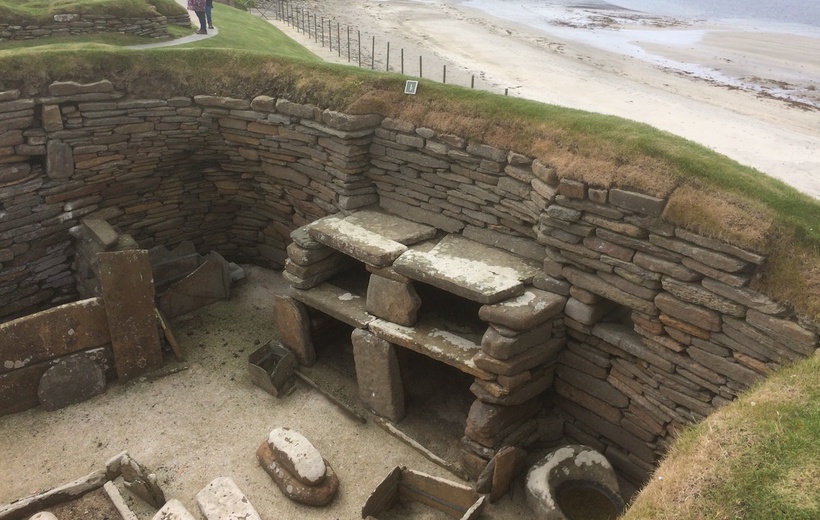 Due to coastal erosion Skara Brae, the oldest and best preserved Stone Age village in Western Europe, now juts out of the surrounding Orkney coastline in the north of Scotland (photo: W. ten Brinke).

The Third European Climate Change Adaptation Conference was held in Glasgow in June 2017, focused on “Our Climate Ready Future”. The ClimateChangePost presents a selection of contributions to this conference. This article is the sixth in a series of eight based on presentations given at the conference, and interviews with the scientists.

This article is written by Wilfried ten Brinke and based on presentations at the European Climate Change Adaptation Conference in Glasgow in June 2017, an interview with Alistair Rennie (Scottish Natural Heritage), Jim Hansom and James Fitton (University of Glasgow), and additional input from Mairi Davis (Historic Environment Scotland).

Eroding coasts are a phenomenon throughout the world. In densely populated countries and where high economic values or vital infrastructure are at stake measures are being taken to stop the erosion and protect the hinterland. The short term costs of these investments are generally less than the values to be protected. But what do you do when cultural or archaeological assets are at risk somewhere remote, in the middle of nowhere? I went to Skara Brae, the oldest and best preserved Stone Age village in Western Europe, on the coast of Orkney in the north of Scotland. It is threatened by coastal erosion, according to leading coastal geomorphologists I spoke with at the European Climate Change Adaptation Conference (ECCA) in Glasgow this month.

Skara Brae, a Stone Age village on an eroding coastline

The history of Skara Brae dates back about 5,000 years. The village was abandoned about 4,500 years ago as it became buried by wind-blown sand. It remained covered by sand dunes until 1850 when its seaward edge was exposed by coastal erosion during a violent storm. The excavations that followed revealed the true extent of this remarkable find. Not large in size, but very well preserved. It is a valuable source of information on the daily life of people in Stone Age Orkney. According to the displays in the museum at the site the village wasn’t built at the coast but at some distance inland. Since then, the land to the seaward has retreated over many centuries of coastal erosion so that the village now juts out of the surrounding coastline and is protected from the battering waves by a thick wall of concrete and stone. However, since the surrounding coastline will continue to recede, what about Skara Brae? The village has a long history, but will it have a long future? This can be partly answered by the results of new research in Scotland’s National Coastal Change Assessment.

Alistair Rennie of Scottish Natural Heritage presented the results of Scotland’s National Coastal Change Assessment (NCCA) to the ECCA in Glasgow. The assessment is part of the Climate Change Adaptation Program for Scotland, carried out under the Climate Change Act (2009). Coastal erosion has historically been an issue in many parts of Scotland and continues to cause problems now and into the future. Scotland has many key assets located at the coast in addition to 3.5 million people who live within 10 km of the coast. The new research aims to identify coasts, hinterlands and assets that are inherently susceptible to erosion and which may become vulnerable in the future.

Mairi Davies is Climate Change Manager at Historic Environment Scotland. 'Many historic environment assets are vulnerable to coastal erosion and Historic Environment Scotland is working with partners to address this issue', she says. 'The NCCA is enabling us to gain a better understanding of the vulnerability of coastal sites and the processes at work. At Skara Brae, we are also monitoring change using terrestrial laser scanning, to inform management of the site.'

Rennie, Hansom and Fitton have reconstructed the development of Scotland’s coastline from 1890 to the modern day and made projections to 2050. Making future projections is difficult since climate change may result in erosion rates that differ from past rates. 'The past may not be the key to the future', Rennie stated. Nevertheless, future projections are now needed for timely decisions on how and where to adapt. Especially for Scotland since 11% (21,000 km) of Europe’s coastline is Scottish. The focus is especially on the 19% (4000 km) of the Scottish coastline that is made up of soft sediments like sandy beaches and dunes. These soft coasts are much more vulnerable to erosion than hard (rocky) coasts and a large proportion of coastal buildings, assets and infrastructure (35%) are located on these soft and vulnerable coasts.

Rennie, Hansom and Fitton showed that since the 1970s 12% of the Scottish beaches have eroded, an increase compared with the period between 1890 and 1970, and that the average modern erosion rates have doubled. On the positive site 11% of the coastline accreted, down on the earlier period, although the average accretion rates have increased slightly. The future may not be positive, however. 'It is likely that climate change is affecting coastal erosion. More assets are likely to be at risk by 2050 as erosion quickens and expands into new areas', Rennie concluded in his presentation.

In another presentation, Jim Hansom of the University of Glasgow told the audience that 'Scottish strategies that fix the shoreline in one place are increasingly unsustainable'. According to research by Hansom, Fitton and Rennie the delivery of well-developed, adaptive policies is lacking for large sections of the Scottish coast. 'Adapting for climate change is all about fixing the roof when the sun shines. Coastal erosion and flooding must be considered together, and both are set to worsen in the future', he concluded. 'Action is needed now in the face of increasing erosion and delay will prove expensive'.

The people’s attitude is to hold the line

Managed realignment or managed retreat is the engineer’s way of saying that erosion shouldn’t be stopped per se. It is too expensive to protect the entire eroding coastline. In fact, it may be good for nature to give land (back) to the sea and thus create new habitats. But the engineer’s language frames the discussion in the wrong direction, according to Jim Hansom. 'Managed retreat has a negative sound to it', he says. 'The people’s attitude is to hold the line and not give up. Retreat doesn’t fit in their way of thinking.' Also, people who own land get relatively little compensation when their land is allowed to erode, and this is a key barrier to a long-term and more adaptive approach to coastal management. We need to develop strategies that, wherever feasible, enable (and fund) the relocation of threatened coastal assets, and promote adaptive coastal land-use policies to limit new development in vulnerable coastal areas. According to Bill Parker of Suffolk and Waveney Council, another speaker at the conference, people’s long-term view spans only two generations, and they only get involved in taking measures once erosion affects the value of their property or house.

No easy answers for the future of coastal archaeology?

Coastal erosion at Skara Brae continues. The present sea wall has been strengthened several times and no doubt further strengthening will be needed into the future. Across Scotland, sea level rise is now more rapid than any of the land changes that followed the most recent glacial period, and erosion is quickening as a result. Alistair Rennie and Jim Hansom agree that the best way to manage the coastline is an integrated approach where the entire coastline is treated as one system. The problem is that fortifying one spot, such as Skara Brae, often enhances erosion elsewhere and makes things worse for adjacent areas.

Nevertheless, for archaeological “jewels in the crown” like Skara Brae (part of the UNESCO Heart of Neolithic Orkney World Heritage Site), expensive protection schemes may well prove justifiable, although increasingly will become the exception to the rule. For at least some of our valued cultural and historic asset stock, the sustainable future may involve moving them away from erosion risk at the coast. For coastal archaeology, this may translate into relocation and reconstruction, as well as pre-emptive, rescue excavation. In this context, Scotland’s National Coastal Change Assessment enables a forward-looking policy approach, where risk can be assessed and proactive planning actioned to either protect, relocate, excavate or abandon.

This brings us back to the question at the beginning of this article: What do you do when cultural or archaeological assets are at risk somewhere far off? How far should Scotland go to protect its archaeological assets or other historic sites? For a few key sites like Skara Brae the answer may be clear enough, but for lesser sites uncomfortable decisions will continue to be needed both in Scotland and elsewhere!