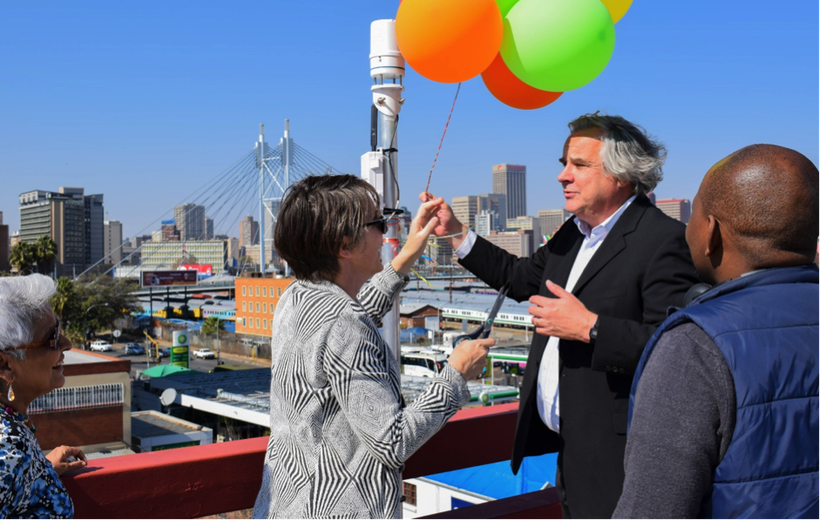 No part of the planet is urbanizing faster than sub-Saharan Africa. Johannesburg is a big city of about 5.3 Million people, part of a larger metropolitan area. The city’s large infrastructure investments are based on interpolated statistics of the nearest by weather stations. These stations are very few; a more dense network is needed. Through TAHMO extra weather stations are implemented in collaboration with IBM, City of Johannesburg, the South African Weather Service (SAWS) and the Maths Centre, as a proof-of-concept for cities in Africa and for Southern Africa at large. TAHMO is already active in the rural areas of East, Central and West Africa. This is the start for South Africa.

Satellites and radar are being used more and more to estimate the spatio-temporal distribution of rainfall, for example. National Meteorological Agencies, such as the South African Weather Services (SAWS), still need to calibrate them with ground weather stations.

That’s what makes the newly designed automatic weather stations of TAHMO, produced by the Meter Group (formerly Decagon) and jointly researched and developed with TAHMO, so interesting: they meet the World Meteorological Organisation standards at relatively low costs. TAHMO is a non-governmental organisation that introduces these stations throughout Africa, supplying national meteorological departments with free data for their climate observations, to improve their forecasts. TAHMO’s goal is not to replace conventional automatic weather stations already installed but to add to them, to improve weather observations, especially where resources are scarce.

Why starting with Johannesburg?

When AquaLinks offered its services to TAHMO to introduce these stations in South Africa, there were several reasons to start this proof-of-concept in Johannesburg.

The economic added value of an extra weather station in a city is higher than in a remote area, even if the network is already more dense. The investment costs, and the costs for operation and maintenance can be earned back quicker to re-invest in the network in Johannesburg or roll the stations out over the rest of South Africa. Besides, in Johannesburg many stakeholders are located that are important for a further roll out of TAHMO weather stations: head offices of many potential funders, an NGO such as the Maths Centre that can use the data to improve science and maths skills and raise awareness on climate change at secondary schools, and clients of data, weather and climate services such as mining and insurance companies, and engineering firms.

Many African cities are improving their climate change adaptation strategies, and need observations of their climate for that. Within a few years a higher density network can add to insights in the spatio-temporal distribution of variable weather parameters such as rainfall. Observations may proof valuable not only to municipalities, companies or science, but to citizens as well. For instance, in Johannesburg a considerable amount of potable water is used for gardens. How about connecting  a sprinkler to a weather station or to weather forecasts to save water?

The proof-of-concept stage of 10 stations in Johannesburg will be used for testing the public private partnership collaboration and the technicalities. And then a large number of stations will be rolled out over the rest of Southern Africa, following East, Central and West Africa!