‘Edinburgh will continue to be a climate resilient city’ 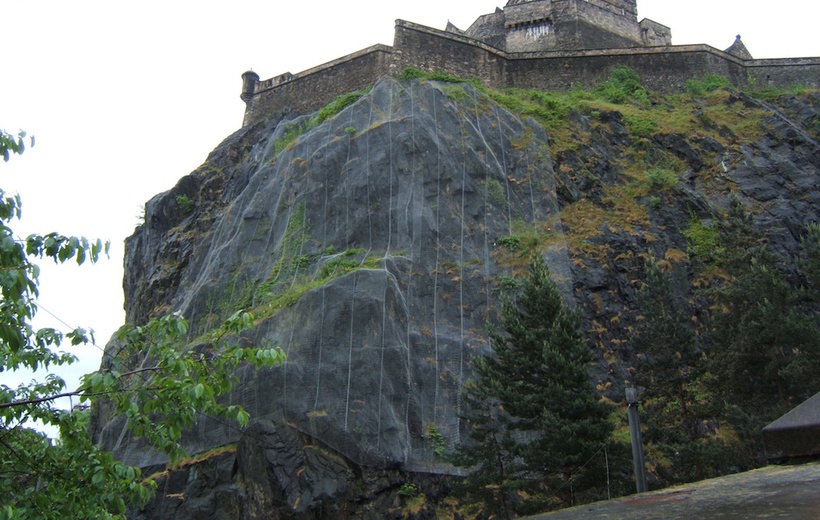 Photo: Nets on the rock of Edinburgh Castle protect the people below from stones that come loose due to heavy rainfall.

The Third European Climate Change Adaptation Conference was held in Glasgow in June 2017, focused on “Our Climate Ready Future”. The ClimateChangePost presents a selection of contributions to this conference. This article is the last in a series of eight based on presentations given at the conference, and interviews with the scientists.

This contribution was presented by Fiona MacLeod (The City of Edinburgh Council) at the European Climate Change Adaptation Conference in Glasgow in June 2017. The presentation was part of a session on how UK Cities are adapting to climate change.

‘Cloudbursts or extreme rainfall is one of our main concerns with respect to climate change’, Fiona states when she talks about ‘Edinburgh Adapts’, a joint initiative of a large number of partners to climate proof the city. It is the city’s first adaptation action plan, providing a blueprint for dealing with the impacts of climate change and making the city more resilient.

The composition of the ‘Edinburgh Adapts’ partnership clearly reflects the focus on greening the city, protecting its biodiversity and its historic environment, with partners such as the Royal Botanic Gardens Edinburgh, Historic Environment Scotland, Edinburgh World Heritage, Scottish Wildlife Trust, and The Edinburgh Biodiversity Partnership, among others. A catalyst for this initiative is the Climate Change (Scotland) Act 2009, that places a legal duty on public organizations in Scotland to adapt to the impacts of climate change and report on progress.

Investing in green infrastructure provides a wide range of adaptive benefits, including reducing the impact of heavy rain by absorbing water and slowing run-off. This includes looking at developing climate proof parks, depaved and regreened gardens, and permeable pavements in the streets. Along meandering rivers hard infrastructure may be removed and green naturalized areas re-introduced to slow down river discharge. This naturalisation of flood defences also increases biodiversity.

​In isolation these measures are not new. It is the partnership that makes it special. This creates a window of opportunities to bring biodiversity, greenspace and climate change adaptation together. Fiona: ‘A lot of organizations are doing this anyway, they just don’t call it climate change adaptation. The best thing of ‘Edinburgh Adapts’ is that it combines actions of several partners that would have been carried out anyway but can now be done more effectively, and on a larger scale.’

It is important that citizens are involved as well. Initiatives in the Action Plan aim to encourage residents to take action themselves, such as encouraging them to depave their front gardens, which is one way to reduce flooding risk while raising awareness of climate change adaptation. The Action Plan calls for a long term commitment from many different organizations in the city to keep on adapting to changing circumstances. This is not so easy. According to Fiona 'adaptation is hard to sell'. What does work, however, is to combine long-term investments in climate adaptation with short-term benefits for the local population. This way another goal is used to improve adaptation at the same time. Turning Edinburgh into a sustainable food city (‘Edible Edinburgh’) is an example of a short-term benefit that helps protect and preserve greenspace while making the city more climate proof as well.

The first Edinburgh Adapts Action Plan and Vision were published in December 2016. The Action Plan runs from 2016-2020 and contains over 100 committed adaptation actions. The Vision looks further and sets goals for 2025 and 2050. Will the city be climate resilient in 2025 or 2050? Fiona: 'It is important to ensure Edinburgh will ‘continue to be a climate resilient city’. So we aim to keep up with the latest developments on climate change between 2025 and 2050.' The programme is flexible: actions are ‘not set in stone’ and may change depending on the situation. The flexibility is reached by drawing up action agendas for relatively short time steps. This way, step by step, the partnership will respond to the latest knowledge on climate change and the city’s vulnerability to its consequences.