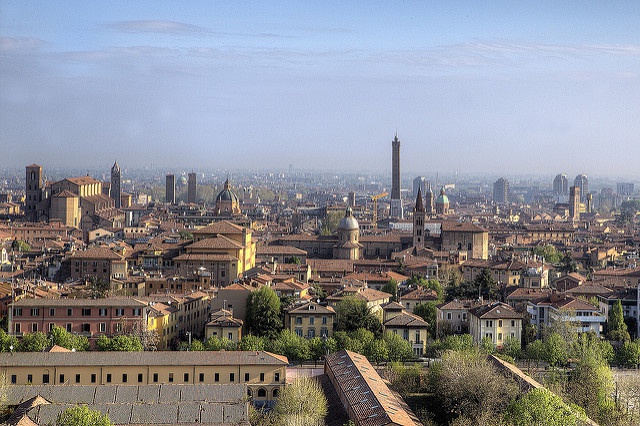 Photo: Bologna is one of the Italian cities that has a plan to adapt to the consequences of climate change, including heavy rainfall events, heat waves, and droughts (photo: Lorenzoclick, www.flickr.com)

The Third European Climate Change Adaptation Conference was held in Glasgow in June 2017, focused on “Our Climate Ready Future”. The ClimateChangePost presents a selection of contributions to this conference. This article is the first in a series of eight based on presentations given at the conference, and interviews with the scientists.

This contribution was presented by Filomena Pietrapertosa of the National Research Council of Italy.

Cities are hotspots for measures to mitigate global warming and adapt to the consequences of it. Not only do cities contribute for a large part to the emission of greenhouse gasses (GHG), they are also vulnerable to the adverse effects of climate change. 74% of the European population lives in urban areas. It is important that cities implement low-carbon policies and adaptation strategies in close collaboration with citizens and local stakeholders. Filomena Pietrapertosa of the National Research Council of Italy (CNR-IMAA), together with a team of five researchers1), studied climate change adaptation planning in a sample of 32 Italian cities (Eurostat Urban Audit city sample). She assessed the state-of-the-art, and looked for barriers, opportunities and future perspectives with respect to taking action.

Italian cities focus more on mitigation than adaptation. This is because a 1991 national law (n. 10/1991) obliges large Italian cities (> 50.000 citizens) to have an energy plan mainly aimed at reducing energy consumption rather than reducing the emission of greenhouse gases (1991 was too early for that). As a result a large number of Italian cities have developed mitigation plans and carried out decarbonisation strategies. Currently, under the aegis of the Covenant of Mayors, about 3000 Italian towns and cities have submitted their Sustainable Energy Action Plans (SEAPs), pledging themselves to reduce their GHG emissions by at least 20% in 2020.

On the adaptation side, however, the situation is completely different. From her assessment Filomena concludes that only two large cities (Bologna and Ancona) have adaptation plans and address climate change impacts on extreme rain events, landslides, coastal erosion, infrastructure, cultural heritage, heat waves, and droughts. Other cities have civil protection plans that focus on these issues as well; they just don’t have an adaptation plan that integrates all impacts of climate change. According to Filomena, Italian cities have a reactive approach to making the urban environment more resilient; they take action after a disaster has struck. The essence of climate change adaptation, however, is a pro-active approach.

Lagging behind, especially in the South

In this respect Italian cities seem to be lagging behind on other European countries. ‘Italian cities have started late due to the lack of a national adaptation strategy, which was only approved in June 2015’, Filomena explains. Related to this are a lack of awareness of possible impacts of climate change, and a lack of money. The more active cities, like Bologna and Ancona, are in the north of Italy where the enhanced economic prosperity, the ability to attract (EU) funds and a more participated governance represent an advantage over the southern Italian cities. Besides, it is not mandatory to draw up a plan for climate change adaptation. Filomena: ‘It depends on voluntary initiatives to what extent cities take action’. Climate change will probably hit the south of Europe hardest. As a result, cities in the south of Italy seem to be more vulnerable to climate change than cities in the north.

But cities are catching up

On the positive site Italian cities are catching up. In 2015 the new integrated Covenant of Mayors for Climate & Energy has adopted the EU 2030 objectives and an integrated approach to climate change mitigation and adaptation. In response 74 Italian cities have already made a commitment to implement a Sustainable Energy and Climate Action Plan (SECAP). Filomena: ‘This new covenant seems to become the flywheel to make cities in Italy more resilient, as in the rest of Europe.’