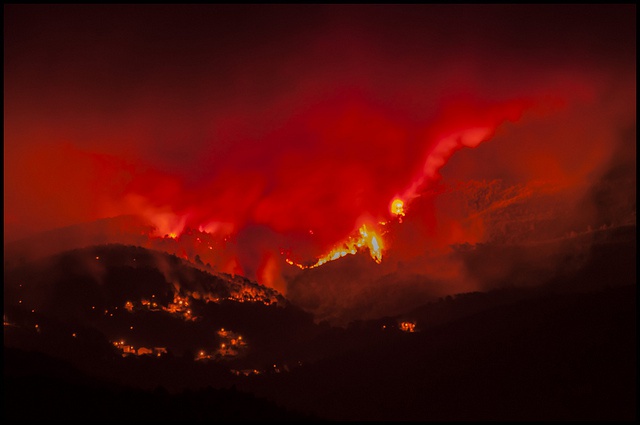 June 18 2017. Large forest fires strike Portugal, northeast of Lisbon. Many people have been killed. This article has been published before on the ClimateChangePost. A lot of research has been done over the last years on the increasing risk of forest fires in southern Europe, including the impact of climate change. Read our articles on the Forest Fires page, f.i. our longread overview on 'Wildfires and climate change, a connection that's hard to deny'.

Before the 1980s fires in mainland Portugal had never reached 10,000 ha of burned area in a single occurrence, according to available data on forest fires. In the last decade two forest fires occurred that covered an area of over 20,000 ha. The number of large forest fires in Portugal is increasing, and the extent of these fires is increasing as well. According to scientists a new era of forest fires has begun in Portugal, and it started somewhere around 1987.

Climate change can be an important driver of greater fire activity, but it’s not the only one. In fact, in southern Europe climate change seems to be a far less important driver than socio-economic factors and changes in land use. Important socio-economic factors are depopulation and ageing of rural populace. Important changes in land use are agricultural abandonment, expansion of highly flammable tree species, and renewed growth of woody vegetation in cleared landscapes. Also, the success in suppressing small and medium size fires is producing landscapes with higher flammability and more fuel loads that contribute to larger and more severe forest fires.

Already degraded areas become more likely to be affected by fires. These areas are characterized by herbaceous plants and shrubs, which are extremely susceptible to fire because of their low moisture content and flammable fuel load. This is a vicious cycle. The rural exodus led to an increase in abandoned farmlands and growth of woody vegetation. This soil degradation as a result leads to more and larger fires that consequently further degrade the soil. Many of these rural areas became liable to the occurrence of devastating fires as a result of the high quantities of biomass accumulated over the years, which could fuel catastrophic fires during the summer months. The proportion of uncultivated land, due to the population exodus from rural areas to coastal cities and other European countries since the 1950s, was the most important factor affecting burnt areas in Portugal.