Less snow in the Alps will affect society in many ways 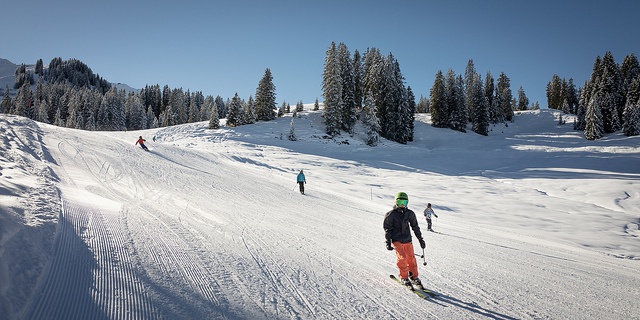 The importance of snow for society

In Switzerland, many alpine towns and villages heavily depend on snow. Up to 90% of their economy is dominated by winter tourism. Besides, like in most mountain regions, melting snow and glaciers in the Alps provide water for heavily populated and farmed areas far downstream even during hot and dry summer months. Swiss hydropower companies use this water to generate a large share of the needed electricity. Snow also has a significant influence on Alpine ecology. Plants and animals in subalpine and alpine ecosystems strongly respond to changes in snow depth and snowmelt timing. Clearly, knowledge on future snowpack changes is of great value for decision-makers, for instance when planning investments for tourist infrastructure, and measures to protect against avalanches, or to protect the environment.

Four snow indices were considered: (1) Mean winter snow depth during December – February;  (2) Fraction of winters with continuous snow cover of at least 5 cm during a continuous period of at least 30 days; (3) Number of snow days with at least 5 cm (necessary for sledding or cross-country skiing) and 50 cm (for skiing on rough terrain), respectively; (4) New snow days, defined as the number of days per year with a height of new snow greater than 1 cm.

The drastic snowpack reductions toward the end of the century have high implications for service providers such as winter tourism, water management, winter road maintenance, or forest management.

The results above can be expected to be relevant also for neighbouring Alpine countries and other mountain regions with a similar climate, since this study spans a large altitudinal gradient and different snow-climate zones. One should keep in mind though that these results are based on mean values of a large number of models whereas variability between model results is high, in the order of 30%.

Selection of related articles in the ClimateChangePost: