Glacier retreat can be slowed down by artificially produced snow 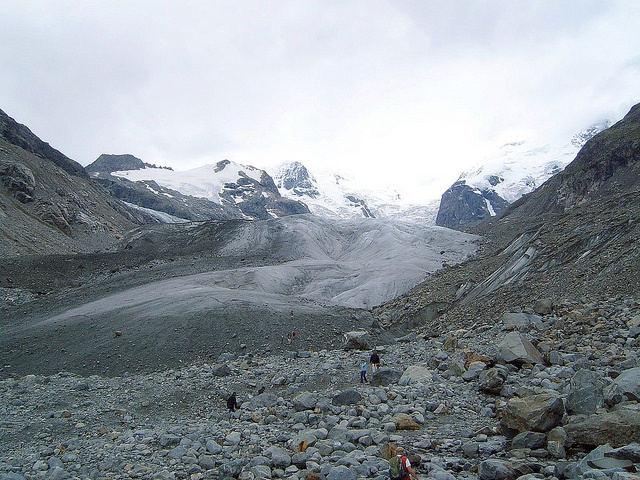 Many glaciers in the world are retreating at historically unprecedented rates. Also in the Alps, where warming over the past decades has been more than twice as large as the global mean, all major glaciers have retreated over distances of several kilometres over the past hundred years. On a global scale, this impacts sea level rise. On a regional and local scale, this affects melt water supply (reservoirs, irrigation), security of infrastructure and buildings (ice avalanches, outbursts of glacial lakes), and the tourist industry (ski areas, attractiveness of alpine scenery).

In Switzerland, the Morteratsch Glacier is a major touristic attraction. The glacier is currently about 6 km long, and spans an altitudinal range of about 2200 to 4000 m. Due to strong retreat the lowest part of the glacier is getting out of sight from the gravel road that provided direct access to the glacier front. The local community wondered whether measures could be taken to slow down the retreat of this glacier in an environmentally friendly way. The effect was studied of artificially producing snow on the glacier in the summer to slow down its retreat, covering an area of 0.8 km2 in the higher ablation zone. In addition to adding mass to the glacier, artificial snow has the advantage of increasing the albedo and thus reducing the amount of energy available at the surface for melting. Lakes in the surrounding area can provide the water. The study was based on a model of the dynamics of the glacier and a 20-year weather station record from the lower part of the glacier.

The main conclusion of the study is that deposition of artificial snow on the Morteratsch Glacier can have a significant effect on the future evolution of the glacier. It takes about 10 years before the snow deposition starts to work out on the position of the glacier snout. Then the snow deposition appears to become effective. Under a scenario of modest global warming, the difference in glacier length between model calculations with and without artificial snow is 400 to 500 m within two decades.

Thus, keeping an area of 0.8 km2 covered by snow for many decades is an enormous and expensive task, but it may be technically possible.