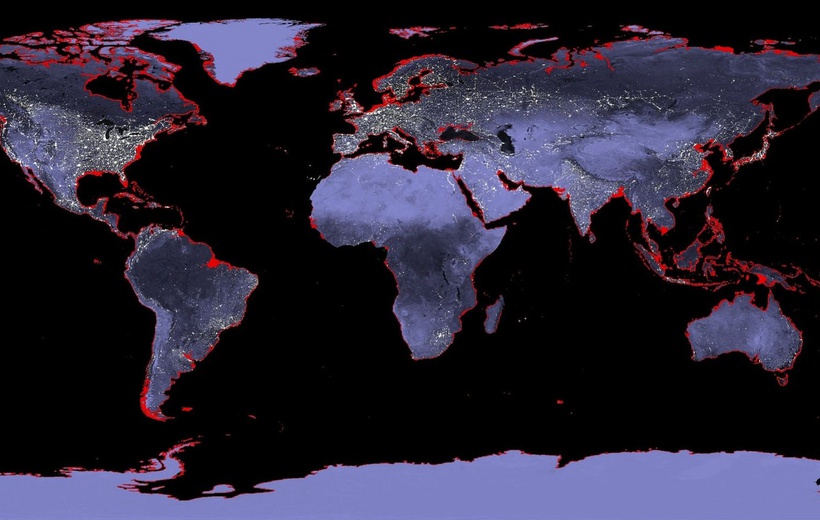 Drivers that contribute to sea level rise are thermal expansion of ocean water, melting glaciers, mass loss of the Greenland and Antarctic ice sheets, and changes in water volumes stored on land. Recently it was shown that global sea level rise may strongly accelerate from hydro fracturing and ice cliff instability of the Antarctic ice sheet, causing significantly more sea level rise by the end of this century than presented in the IPCC’s latest assessment report. Studies that have included these new insights project sea level rise at the end of this century up to one meter higher than the IPCC estimates.

Scenarios of socio-economic development and of global warming

How fast global sea level will rise depends on the size of the processes that contribute to sea level rise. These processes in turn depend on the combination of socio-economic developments around the globe and the impact of greenhouses gases on global warming. Socio-economic developments are described in scenarios, storylines that include elements like population and economic growth, and an ambition to mitigate climate change and adapt to the consequences. Different storylines reflect different impacts on the environment. The impact of greenhouses gases on global warming is described in so-called Radiative Forcing Targets: the energy intensity that warms the atmosphere, expressed in W/m2. A high-end scenario of global warming agrees with a lot of Watts per square metre. A low-end scenario agrees with far less Watts per square metre, and hence with a strong effort to mitigate the impact of greenhouses gases on global warming. High- and low-end scenarios of global warming are 6.0 W/m2 and 2.6 W/m2, respectively.

Five scenarios of socio-economic development, the so-called Shared Socioeconomic Pathways (SSPs), have been designed to comprehensively capture varying levels of socioeconomic challenges to mitigation and adaptation:

These Shared Socioeconomic Pathways and Radiative Forcing Targets can be combined to estimate future sea level rise. This has been done in a recent study, in which also the latest findings on hydro fracturing and ice cliff instability of the Antarctic ice sheet were included.

If we would not take measures to mitigate global warming, the aforementioned socio-economic scenarios would lead to sea level rise in 2100 (relative to 1986 - 2005) that varies from 89 cm for the SSP1 scenario up to 132 cm for the SSP5 scenario. These are median values: the likely ranges (including 66% of the model results) are 57 - 130 cm for SSP1, and 95 - 189 cm for SSP5. Projections for the other scenarios are in between these values.

The 132 cm sea level rise in the SSP5 scenario without mitigation is a few decimetres lower than recent results on comparable scenarios. However, this study also shows that sea level could rise up to 2 m without mitigation. This highlights that ambitious climate policies are needed to avoid the most severe impacts from rising sea levels around the globe. As such, these higher estimates point to a growing risk of potentially catastrophic sea level rise by the end of the 21st century under unchecked climate change. The study also shows, however, that strong mitigation efforts could prevent the onset of the rapid dynamics that cause the additional sea level contribution from the Antarctic ice sheets. Still, even when mitigation policy proofs highly successful, sea level rise will continue well beyond the 21st century.