A future on fire 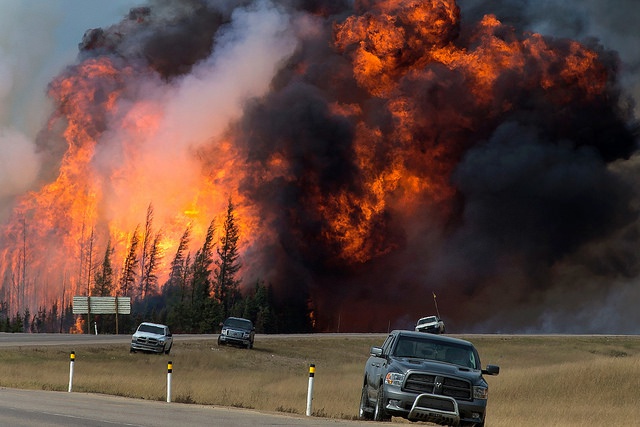 The ‘new normal’: the fire in Fort McMurray, Canada, led to nearly $9 billion of damage in 2016 (photo: Climate Outreach, www.flickr.com)

“Climate change and conservative forest management may mean bigger and more frequent wildfires”, H. Anu Kramer recently stated in a book review in the journal Science. Indeed, large and uncontrolled wildfires seem to have become the ‘new normal’ as some politicians call it. Climate change is one of the drivers, science has shown, but it’s not the only one. The way forests are managed is an important driver as well.

The ‘new normal’ can be extremely devastating. The fire in Fort McMurray in Alberta, Canada, in 2016 destroyed 2800 homes, forced the evacuation of 88,000 people, and will likely end up costing nearly $9 billion. The ‘new normal’ has California in its grip, again, and also southern European countries like Portugal and Spain are hit by large wildfires every summer.

Climate change effects that increase wildfire risk are more and longer-lasting droughts, diseases, and the proliferation of damaging insects such as bark beetles that kill trees and increase the flammability of forests. In combination with current management of fire suppression and past legacies of forest management, this results in longer fire seasons and fires that burn bigger, hotter, faster, and more frequently than in the past. Once the fire has been extinguished, devastation continues when erosion of the bare land carries sediment, debris and high concentrations of nutrients into lakes and reservoirs, clogging systems that may provide water to millions of people, and damaging aquatic ecosystems.

One measure to prevent wildfires from becoming extremely devastating is the practice of allowing more controlled and managed wildfires in areas where the risk of escape is low. Controlled burns can help to reduce fuel loads that could lead to an uncontrollable blaze under different weather conditions.