Cultivated peat soils lead to land subsidence and emit greenhouse gases. How can we avoid this? 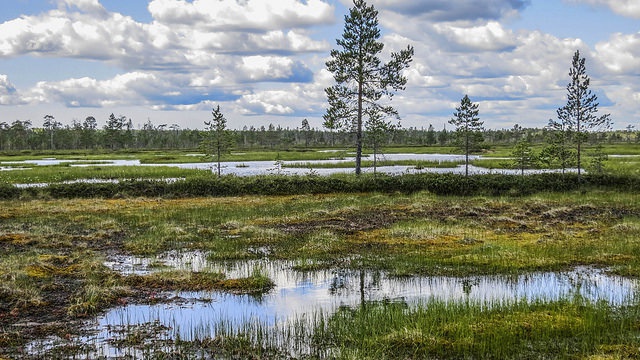 Undrained peatland in the north of Finland (photo: Ninara, www.flickr.com)

The development of new drainage techniques at the beginning of the 20th century has accelerated the exploitation of peatland area and altered patterns of use. In the Nordic countries between 3% and 40% of the original peatland area has been drained for agricultural purposes. In some regions, e.g. in Finland, more than 50% of the peatlands are drained for forestry and only 3% for agriculture. Land drainage in all the Nordic countries was largely a government driven policy to mitigate severe socio-economic risks related to emigration to USA, food security, unemployment and poverty.

Drained organic soils differ significantly from mineral soils as they subside over a relatively short time period due to compaction, shrinkage, erosion and oxidation. Cultivation in Nordic conditions leads to subsidence rates that can vary from 0.5 cm/year on fields with pasture to 2.5 cm/year on fields with row crops. This subsidence leads to loss of organic matter, leaching of nutrients, mineralization of carbon and nitrogen and therefore emission of greenhouse gases carbon dioxide (CO2) and nitrous oxide (N2O).

Agricultural peatlands require repeated lowering of drainage as subsidence alters the effectiveness of the original drainage system with reduced bearing capacity and lower yields. Ultimately, long-term agricultural usage of peatland depends on the possibilities to redrain the peat, and the quality of underlying substrates and its suitability for long-term agriculture.

Organic soils are responsible for a significant portion of the anthropogenic CO2 and N2O emissions. N2O emission is particularly relevant since N2O is a 300 times more effective greenhouse gas than CO2. Drainage of peatlands changes the hydrology and microbiological processes of the peat and therefore impacts gas exchange from the peat dramatically. Greenhouse gases emissions associated with peat extraction, peatland forestry and agriculture have to be accounted for in national inventories on total emissions of greenhouse gases.

And draining peatlands has several other negative effects

Peatlands are important to mitigate regional flooding since they store water from heavy rainfall. Draining peatlands may therefore negatively impact flood protection. Also, ecosystem processes such as carbon sequestration and biodiversity are disturbed. Due to drainage, water flows more vertically through the topsoil layer leaching out nutrients, dissolved organic carbon, and in some cases metals.

These negative consequences of using peatlands for agriculture raise a few pressing questions. Should farming continue on peat soils? Can management choices reduce negative impacts? What alternatives exist and what are their socio-economic and environmental consequences? These questions were addresses in a recent review.

Afforestation is not the solution

Some say afforestation of drained peatlands, especially croplands, reduce the overall emissions of greenhouse gases. Indeed, CO2 emission of afforested former croplands can be lower than in arable croplands, although the effect depends strongly on the climatic conditions. In most cases, however, this is not true for the N2O emissions; these emissions can remain high for decades.

One solution: continue cultivation as long as this is profitable

According to the authors of this review there is little or no scientific evidence that changing cultivation methods or growing specific crops can reduce the emission of greenhouse gases. They recommend, therefore, that the sites that are cultivated should continue the cultivation as long as this is profitable. Crops should be managed in such a way as to ensure a maximum return for each CO2 equivalent emitted, they state, and this could be achieved by maintaining biomass levels as high as possible.

After cultivation, forestry or biocrops can be an option as an alternative land use, if the soil and drainage is suitable for such vegetation. Forestry or biocrops will not stop CO2 emission from the peatsoils and high N2O emissions may remain, but carbon will be sequestered. Some bioenergy crops can be productive even with a high water table level. For fields too wet to cultivate with agricultural crops, these bioenergy crops could prolong the life of the area as a productive field with the ability to sequester carbon in the biomass. Harvesting these crops on wet soils remains a challenge, however.

Another solution: change in land use

Rewetting has been recommended as a practice to protect organic material in former cultivated land from further mineralization by excluding oxygen, and thereby reducing the emission of greenhouse gases. It has also been proposed as a method to increase biodiversity. Rewetting must be accompanied by moisture tolerant crops (paludiculture) if one aims to continue agricultural use.

While the goal of rewetting often is to encourage the return of peat forming plants and the ecosystem services they provide such as carbon sequestration, it is not well known if these plants will grow on peat soils that have been altered by the process of drainage and management. Peat extraction followed by rewetting might provide a sustainable option as rewetting is often easier if the nutrient rich topsoil peat is removed, starting the peat accumulation from scratch. Also this provides a way to finance the after-use.

In the short term (0-5 years) rewetting can lead to a net increase in the emission of greenhouse gases because stopping drainage may lead to a high but fluctuating water table. A highly fluctuating water table can lead to an increase in CH4 emissions due to submersion of the active rooting layer leading to anoxic mineralization of labile carbon combined with a reduction in CH4 oxidation. In contrast, drained organic soils are only minor sources or even sinks for methane (CH4). Thus it is important to ensure a high and relatively stable water table when drained organic soils are rewetted. Research in the Netherlands has shown that rewetting can restore the carbon sink function of managed peatlands after 15 years.