When sea level rise accelerates, inland migration may not be that easy 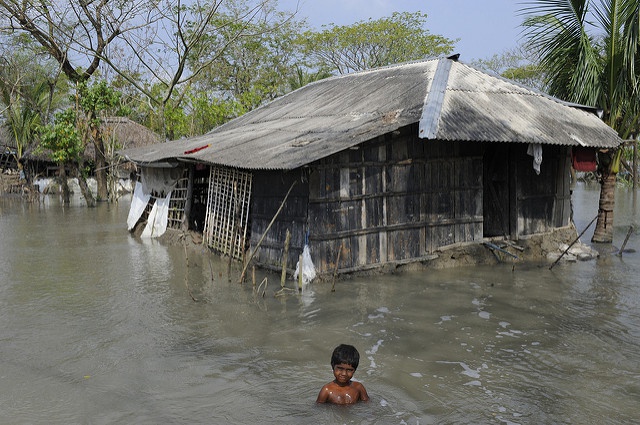 Recently, scientists showed that sea level might rise much faster than projected by the IPCC in its latest (5th) assessment report. What if they are correct, and large-scale inland migration takes place?

In 2000, about 630 million people inhabited the global low-elevation coastal zone, not including seasonal visitors and second-home owners. In Europe alone, 70% of the largest cities are vulnerable to sea level rise, most being in the low-elevation coastal zone. Under high rates of population growth, as many as 1.4 billion people globally could inhabit this zone by 2060. Then and now, the most densely populated coastal zones are the deltas in Asia.

The worst-case scenario of a much faster sea level rise than currently projected by the IPCC would induce large-scale inland migration. Access to hinterland resettlement may not be that easy, however. Inland migration faces several barriers, both natural and anthropogenic. The main barriers have been inventoried in a recent study.

According to the authors of this study, inland living space will probably be partially or wholly off-limits to newcomers. According to them these spaces are “mortgaged for transportation, carbon storage, toxic and waste dumps, urban sprawl, deserts and other wastelands, war zones, unexploded ordinance graveyards, large private enclaves held by wealthy people, and a variety of semi-permanent polluting uses”. They have estimated that the total global spatial mortgage for 2100 might be up to 105 million km2, roughly 70% of the Earth’s current terrestrial area.

Among the barriers-to-entry in interior areas are so-called depletion zones: territories unlikely to support future human existence without unprecedented investment. These territories include degraded lands, dry-lands, and thawing permafrost landscapes. Sea level rise adds dramatically to the problem of providing a suitable living environment for millions of people by encroaching on some of the world’s most fertile landscapes - global coasts and deltas - and turning them to largely barren lands.

A spatial trade-off presents itself when inland cities absorb immigrant waves moving out of the threatened coastal zone. The inland cities expand as a result, and their enlarged footprint and that of roadways and municipal waste sites that accompany them take a toll on agricultural land and open space. Urban growth fragments the biosphere and is difﬁcult to reverse. And, relative to surrounding rural areas, cities become “heat islands” as they grow. The growth of cities and their extensions could therefore encroach on the net primary productivity needed for the food and other biomass needs of 9-11 billion people expected by the end of the century. Just how serious the squeeze on productive land will be is a function of future urban growth. By 2050, 7 out of 10 people will dwell in cities.

No-trespass zones are landscapes severely encumbered by legal exclusion (landownership concentration and gated cities), violence (war and conﬂict), and unusual risk (land mines and radioactivity). Already, fear of food scarcity due to increasingly erratic weather has spurred governments and private entities to ‘grab’ productive land in many countries, concentrating landownership in the hands of wealthy investors, developers, and speculators. In the United Kingdom, for instance, 70% of the land is owned by 1% of the population. In addition to ownership concentration itself, exclusionary land use laws pose additional friction for newcomers. As global cities boom, current practices such as exclusionary zoning and closed communities become magnets for elites and destitute groups alike. These enclaves wall off desirable living spaces for the afﬂuent.

In addition, on-going wars and regional conﬂicts are a much-underestimated barrier to entry. Explosive remnants of war (land mines, for instance) further diminish usable replacement space while it’s lasting chemical constituents (e.g., Agent Orange) jeopardize food chains across generations, and are responsible for ‘no-man’s lands’ in 80 countries. The authors point at a perverse circularity here: competition for productive lands caused by the combination of war and natural disasters produces refugees whose needs for living space may fuel yet more conﬂict.

What options do governments and their allies have to counter landward impediments to climate migration? According to the authors an unprecedented transboundary effort, commitment, and collaboration will be needed. Coastal and interior landscapes must be managed consciously in anticipation of major population shifts from the former to the latter. Land use planning tools include government purchase of at-risk lands, major development restrictions, and managed retreat. The ﬁrst is expensive and the second often beset by legal challenges, the authors state. Managed retreat, the gradual clearance of structures as coastlines recede inland, seems promising because, in the words of the authors, “it relaxes assumptions that coastal improvements and ownership patterns are immutable”.