Wildfires in Portugal: is past trend of forest cover increase now ‘going up in smoke’? 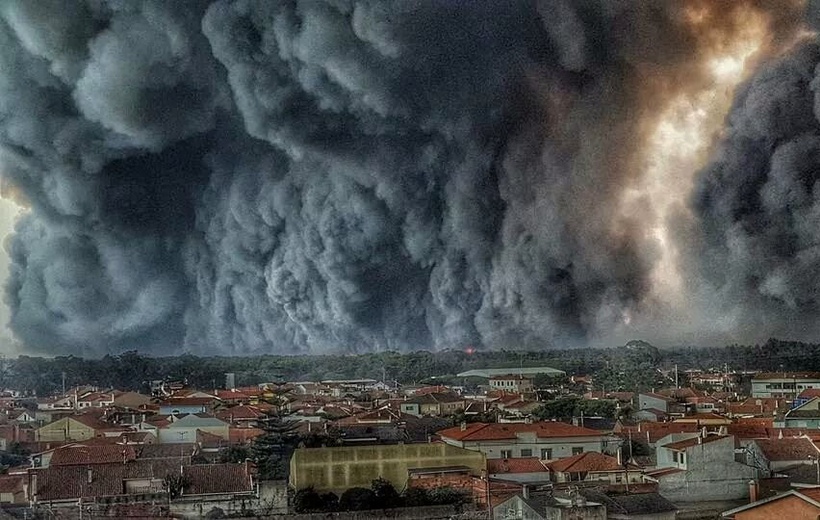 Dark skies in Portugal in October 2017 as wildfires spread over large parts of the country (photo: Nuna Taborda, www.flickr.com).

Many temperate and Mediterranean European countries have seen an expansion of forest cover in the previous century. So does Portugal, but Portugal stands out as the only case in which this trend has reversed recently. Land use data over the period 1907 – 2006 show an expansion of wooded areas (forests and oak woodlands) until 1990. After 1990, the situation reversed, and a conversion of forest cover to shrub lands took place. Results of a recent study suggest that fire has played a major role in this reversion.

Forest area increase in the past

Portugal’s forest area has increased dramatically between 1875 and 2000 from about 7% to nearly 40% of the country’s mainland area, greater and faster than in other European countries. In 1907 wooded areas covered about 27% of the country area. Now, one hundred years later, wooded areas cover 32%, with 14% of oak woodlands and 18% of forests. Maximum woody vegetation cover (37%) was recorded in 1990. The expansion of wooded areas was the result of afforestation programs and the abandonment of agricultural land. Rural depopulation, land abandonment, and the concentration of agricultural activities on fertile soils created the conditions that allowed forests to recover.

Since 1990 Portugal’s total forest cover declined at about 0.3% per year, a remarkably strong decline. Forest area in other higher income countries increased at 0.05% per year during the same period. In a recent study scientists relate this decline to lack of active management and suppression driven wildfire policies that promote fuel accumulation. As a result, bigger and recurrent fires set an important disturbance, jeopardizing forest and conservation goals. The authors of this study wonder whether ‘Portugal’s forest transition is going up in smoke’.

A trend reversal of this magnitude is unique compared with other fire-prone regions in the world. For example, in Galicia and Catalonia, which also experienced rural land abandonment and afforestation, wildfire incidence is lower than in Portugal, and forest statistics show solid forest expansion trends in Spain, France, Italy, Greece, Turkey and Morocco.

Thus, fire and its mismanagement seem to have played an important role in reversing the trend of wooded area increase in Portugal into a decrease since 1990.