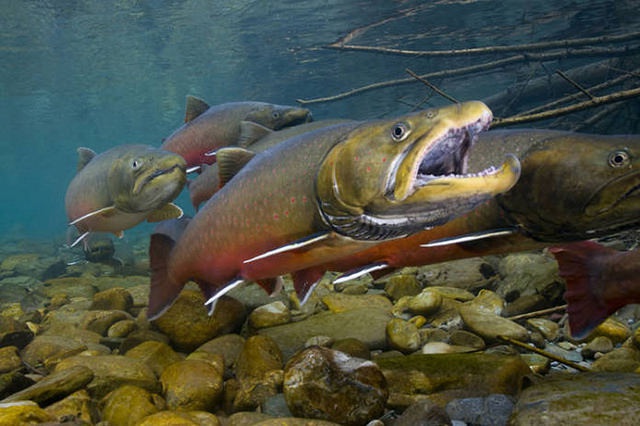 There is strong evidence for genetic responses to climate change, although most evidence refers to small organisms with short generation times. There is little documented evidence of evolutionary change from species with longer generation times such as birds, mammals, and trees.

Physiological responses are widespread in the oceans

Physiology is the functioning of organisms. Physiological processes of organisms may adapt to higher temperatures and other climate-mediated changes, or fail to do so. These responses can occur within a generation or between generations. In marine systems, physiological responses to both climate warming and changing ocean conditions are widespread.

Organisms will get smaller

In general, decreasing body size with warming is expected, thus increasing surface-to-volume ratios, which is generally favored under warmer conditions.

Plants and animals ‘wake up’ earlier in spring

For most species, migrations and life-history processes (so-called phenology, such as budding and flowering in plants, hatching and fledging in birds, and hibernation in mammals) are closely tied to seasonal and interannual variation in climate, and there is now overwhelming evidence that both have been affected by climate change. Across marine, freshwater, and terrestrial ecosystems, spring phenologies have advanced by 2.3 to 5.1 days per decade. Changes in the timing of migration events have been extensively documented, including advances in spring arrival dates of long-distance migratory bird species in Europe, North America, and Australia. In marine and freshwater systems, advances in the timing of annual phytoplankton blooms, the basis for many aquatic food webs, have occurred more rapidly than temporal shifts in terrestrial plants. Such changes in plankton phenology have been attributed to increases in water temperatures, reduction in the duration of ice cover, and the alteration of the seasonal duration of thermal stability or stratification of the water column.

About 80% of communities across terrestrial, freshwater, and marine ecosystems exhibited a response in abundance that was in accordance with climate change predictions. 52% of warm-adapted marine species, for instance, increased in abundance, whereas 52% of marine cold-adapted species decreased. Excessive heat causes bleaching and mass mortality of corals in the tropics. The brown trout has lost habitat in the Swiss Alps due to increased water temperatures. Some of the best evidence for climate-change impacts on the abundance of terrestrial species comes from analyses of bird population trends derived from systematic monitoring schemes in Europe, with warm-adapted species having increased in abundance on average since the 1980s and cold-adapted species having declined. Climate change can increase the abundance of temperature-sensitive disease vectors, with subsequent effects on disease outbreaks.

Communities shift to other (warmer) areas

One of the most rapid responses observed for marine, freshwater, and terrestrial species is a shift in their distributions to track optimal habitat conditions. There has been a consistent overall trend for tropical, warm-adapted species to expand their ranges into environments previously dominated by temperate cold-tolerant species. A similar phenomenon has been documented in the Arctic, where boreal fish communities have responded to warming in the Barents Sea by shifting northward, resulting in a high turnover in Arctic fish communities. Shifts in species distributions have also occurred across elevation gradients. In France, for instance, upslope shift was observed in recent decades in mountainous stream-dwelling fish.

Interactions among species are being disrupted

As a by-product of the redistribution of species in response to changing climate, existing interactions among species are being disrupted, and new interactions are emerging. These novel biotic interactions can exacerbate the impacts of abiotic climate change. This may lead to predator-prey mismatches, for instance due to an earlier bloom or geographical shift of prey compared with the predator.

Diminished resilience may lead to ecological regime shifts, in which one ecosystem state shifts to an alternative and potentially undesirable stable state. In lakes, for instance, climate change has increased the risk of regime shifts from clear water to turbid states and increased the occurrence of cyanobacteria blooms.

The impacts affect us in several ways

Disruptions have documented consequences for people, including unpredictable fisheries and crop yields, loss of genetic diversity in wild crop varieties, and increasing impacts of pests and diseases. In addition to reducing greenhouse gases, climate action and policy must also focus on strategies that safeguard biodiversity and ecosystems.

Positive and negative effects on fishery and agriculture

The impacts of climate change on marine fisheries have major consequences for human societies because these currently provide about 17% of the global protein for people. The effect of warmer water on fishery may be both positive and negative. In the Arctic, for instance, commercially important fish such as Atlantic cod have increased in biomass primarily because of increases in plankton production from reduced sea ice. In Switzerland, on the other hand, trout catches have been halved over two decades because of rising temperatures in Alpine streams.

Changes in total marine productivity are not just attributed to abundance shifts but also to changes in body size. Eight commercial fish species in the North Sea, for instance, underwent simultaneous reductions in body size over a 40-year period because of ocean warming, resulting in 23% lower yields. Reduced body size in fish is also being recorded in lakes and rivers throughout Europe and has been linked to increased temperature and climate-induced shifts in nutrient inputs.

Impacts on plant genetics and physiology are influencing human agricultural systems. For example, yields in rice, maize, and coffee have declined in response to the combined effects of rising temperatures and increasing precipitation variability over past decades.

Pest and pathogen outbreaks may increase in the future because hundreds of plant pest and pathogen species have shifted their distributions 2 to 3.5 km per year poleward since the 1960s. Emerging threats to human health under climate change are vector-borne (mosquitos, ticks) diseases.

Changes in ecological processes might compromise the functionality of ecosystems. This is an important consideration because healthy systems (both terrestrial and marine) sequester substantial amounts of carbon and reduce risks associated with climate-related hazards such as floods, sea-level rise, and cyclones. In island and coastal communities, coral reefs can reduce wave energy by an average of 97%, and coastal ecosystems such as mangroves and tidal marshes buffer storms, while on land intact native forests are important in reducing the frequency and severity of floods. In many cases, maintaining functioning systems offers more sustainable, cost-effective, and ecologically sound alternatives than conventional engineering solutions.