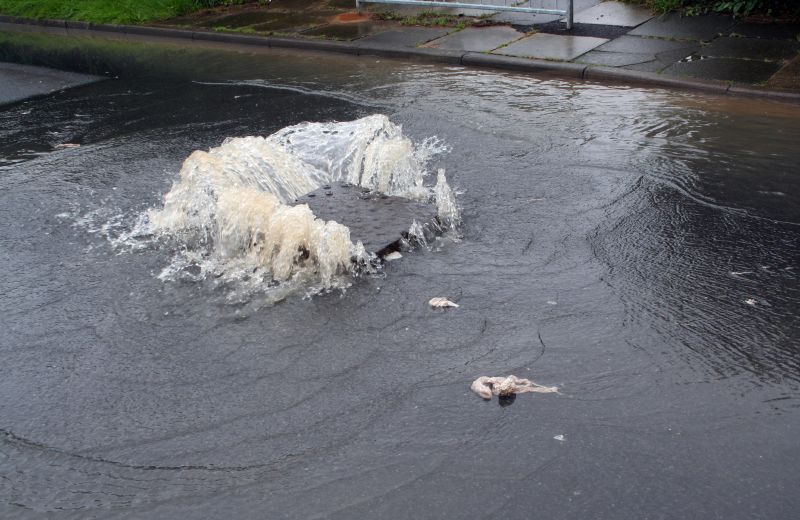 In urban areas where impervious surface covers 50% across the watershed, improving (bio)infiltration through green measures in as little as 10% of the total watershed area can appreciable reduce flooding during large storms. This was demonstrated in a model study for communities in the Midwest USA.

In typical urban storm water networks, flooding arises as the capacity of components within the system is overwhelmed and runoff accumulates at the surface. This is the case in many urban areas where storm water drainage capacity (the size of the sewage pipes) was not designed for the increasing precipitation intensity under climate change. In most urban areas replacing sewage pipes by bigger ones is not an option because it is too expensive. Measures to store storm water temporally in public space, for instance in low-lying parks or so-called water squares, and more vegetation to enlarge filtration capacity are often looked for instead. The latter, called ‘urban green infrastructure’ by engineers, may be effective as an integral component of storm water adaptation measures to mitigate climate change-induced flooding.

The relative efficacy and costs of green infrastructure and conventional engineering adaptation approaches have been quantified for two communities in the Midwest USA. Grey infrastructure approaches include upsizing existing storm water pipes and containing excess flood volume in underground storage chambers. Local-scale green infrastructure practices focus on increasing the proportion of watershed runoff draining to bioinfiltration areas. Utilizing over-curb surface storage in areas where structures would not be impacted was also considered as a non-structural adaptation strategy.

Model results show that adaptation strategies incorporating storm water bioinfiltration may reduce overall adaptation costs while providing a more comprehensive suite of benefits than grey infrastructure alone. For a 10-year design storm, substantial reductions in flood volume were predicted by applying bioinfiltration areas to only 10% of a ‘traditional, built-out urban area’ (with an average impervious surface cover across the watershed of 50%). The flood storage volume of existing green infrastructure was much larger, however, than the flood volume that could be handled by introducing bioinfiltration. This led to the conclusion that for the study site preserving the hydrologic connectivity of green infrastructure was a more robust adaptation approach than engineered infiltration approaches.

Vulnerability of urban areas to storm water flooding varies according to regional climate patterns and site-specific factors such as topography, drainage system configuration and the capacity of soils and other natural or engineered storage elements to store excess runoff. Therefore, the efficacy of green infrastructure versus conventional engineering adaptation approaches will also vary from one urban area to another. Climate-proofing urban storm water networks calls for tailor-made solutions that fit the specific context of a certain urban area.

More information on this topic

Read our article on experiences in New York, London, Copenhagen, Rotterdam and Amsterdam in 'The green revolution in urban drainage'.