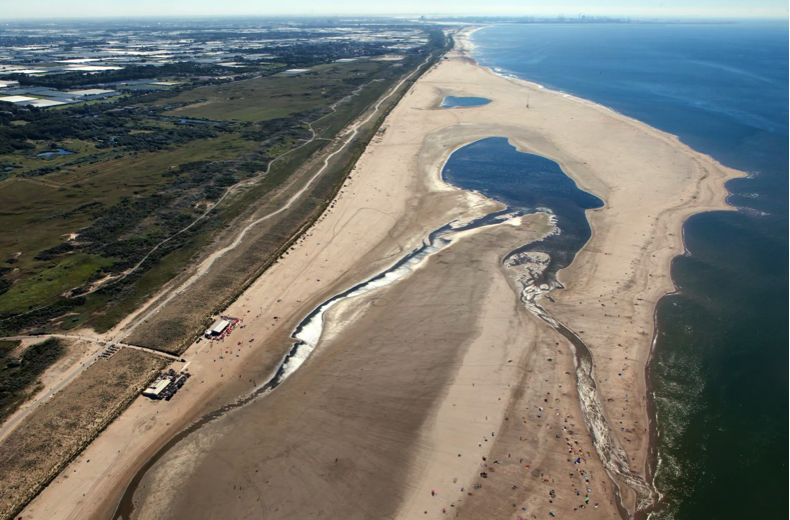 Every year, the sea takes sand from the Dutch coast. This loss of sand is replenished every five years by depositing sand on the beaches and in the offshore area to guarantee the high level of flood protection of the Netherlands. These replenishment operations do the job, but Dutch coastal scientists asked themselves: can we protect the coast in a more sustainable and natural way? They introduced a new concept of coastal protection: the Sand Motor (or Sand Engine).

The Sand Motor is a hook-shaped peninsula deposited by dredgers on the coast. It extends 1 km into the sea and is 2 km wide where it joins the shore. Currents will erode this sand in the coming years and spread it along the coast. This way, nature will replenish the eroded sand along the coast and do the work dredgers have been doing for decades. ‘Building with Nature’, the Dutch call this. A unique experiment worldwide, the first of its kind. Does it work?

It has been five years since the hook-shaped peninsula was created. Now, five years later, the results of the first major evaluation have been published. The conclusions are positive. Five years ago the scheme started with three goals: increase coastal safety, create extra space for leisure and nature and contribute to knowledge development about coastal management. Results show that these goals are achieved, sometimes even better than expected.

Before the trial began, the Sand Motor was expected to last for twenty years. It was thought that the sand would be spread along the coast during that time. That will probably take longer. At present, the Sand Motor is already supplying sand to a five-kilometre stretch of coast. In the first four years, almost a million cubic metres of sand was moved to the south and about 1.5 million cubic metres has been moved to the north. Dunes in the coastal area near the Sand Motor have grown less quickly than expected. However, this has not affected the level of protection afforded by the coast since the coast was already strong enough before the Sand Motor. The main reason the dunes are growing more slowly is that the sand has to cover a relatively large distance before reaching the dunes.

The trial is continuing, as are the monitoring activities

The Sand Motor is an experiment covering a period of twenty years. Obviously, the area will continue to develop. There will be another evaluation in 2021. At that time, Dutch experts will probably be able to provide answers to questions that remain unanswered at present because the evaluation period has been too short. For example: is the Sand Motor cheaper than the standard approach? The Sand Motor is a realistic alternative for coastal management in terms of both costs and effect. It is not yet possible to say for certain whether the Sand Motor is really more economical.

The Sand Motor has become an international icon of innovation. In Jamaica as well as in Norfolk in the United Kingdom, there are plans for a sandy strategy like the Sand Motor.

Source: This article is based on a news release from Rijkswaterstaat, Province of Zuid-Holland, Ecoshape and Delft Technical University.