Wildfires increase in Europe from north to south by a factor 10! 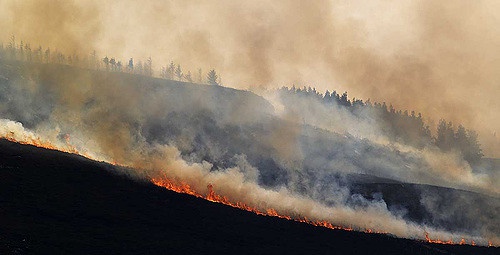 This longread is based on a large number of scientific sources assembled by the ClimateChangePost. Check out the forest fire pages on www.climatechangepost.com for more details.

This longread is the second of three articles on wildfire risk under climate change in Europe. The first one focused on southern Europe. This second article compares wildfire risk in northern Europe to that in the south. The third article will be on measures and strategies to fight wildfires and limit the increasing wildfire risk.

Wildfire risk in northern Europe is much less than in southern Europe. In northern Europe, wildfires are rare: the percentage of forestland burnt annually is less than 0.05%. For comparison: during 1991 - 2002 each year 0.55% of the total forest area of Spain burnt. Also the number of fires is much less. Finland is Europe’s most heavily forested country, with 75% of its land area covered by forests. During the past 3 decades, the average number of forest fires has been about 1000 fires annually, with an average burnt area of 0.5 ha per fire. Again for comparison: the number of wildfires in Spain and Italy was more than 10 times as high. The total annually burnt area of forest in Sweden has not exceeded 5000 ha since 1950s for most years. In northern European countries to the south of Scandinavia similar ‘low’ numbers for annually burnt forest area have been reported: in Germany in the year of the heat wave of 2003, the area of burnt forest was ‘only’ 1315 ha. Wildfires in Italy on the other hand destroy more than 50,000 ha of wood each year. Even in much smaller countries in southern Europe, such as Albania and Croatia, the total area of forest destroyed by fire annually far exceeds the numbers that have been reported for countries in the north.

Russia on fire in 2010, an exception to the rule

In general wildfires in northern Europe so far haven’t been that destructive. The fires in Russia in 2010 are an exception to the rule. In the summer of 2010, western Russia experienced an intense heat wave from early July through to the first half of August, having already been subject to significantly above average temperatures in the previous two months. In Moscow, temperatures were 7.6°C above average for July, making it the hottest July on record by 2°C. On 29th July, Moscow recorded its hottest ever temperature of 38.2°C, the highest since the records began 130 years ago. There were also 33 consecutive days above 30°C in the city. Drought, high temperatures, and fires destroyed one-third of Russia’s 2010 grain crop. The fires, drought, and heat affected over 13.3 million hectares cropland in 41 Russian provinces. Estimates of total economic losses due to the forest fires vary from $15 billion to $300 billion. The latter number also includes the loss of timber. Around 14,000 deaths resulted from the summer heat, with half of them in and around Moscow alone.

Wildfire risk in Scandinavia hasn’t changed much over the last decades. During the 20th century, there has been no significant increasing or decreasing tendency in the climate-driven forest fire danger; summertime temperatures have increased but no significant changes in summertime precipitation have been observed yet. Wildfire risk will increase, though, in the course of this century, as the climate becomes drier, warmer and windier, and drought spells occur more frequent.

Besides a projected increase of the number of forest fire danger days during June to August, the forest fire season probably will start earlier as well due to a projected earlier end of the snow season in the boreal environment. Forest fire activity starts soon after snowmelt, when organic debris from the previous growing season is exposed and dried. A shift of fire activity towards the spring has already been observed.

Wildfire risk may change quite differently in the southern and northern parts of Scandinavia, though. According to model results under a scenario of intermediate climate change, southern Sweden is projected to become a more fire-prone region with an increased number of days with a high fire risk. Northern Sweden on the other hand may be a fire-resistant region in the future climate (until 2100) with less days with high fire risk than today.

Wildfire risk will probably also increase in northern European countries to the south of Scandinavia, such as Germany, the United Kingdom, and Poland.

Difference between north and south also manifest in the Alps

The difference in wildfire risk between northern and southern Europe has also been observed in the Alps. So far, wildfires do not constitute a significant hazard in the central and northern parts of the Alps, while on the southern side they are more common even if fire number and burnt area are low compared to the neighbouring Mediterranean area. In southern Swiss Alps fire risk due to drought events increased over the 1971 - 2005 period.

The potential increase of summer storms could lead to an increase in the risk of wildfires. In regions like the dry valleys of the canton of Valais (Switzerland), the drought-induced dieback of pines enhances the amount of dead wood in forests and therefore the risk of wildfires. According to model results on the future impact of climate change the difference in wildfire risk between northern and southern parts of the Alps will sustain at least until 2050, but probably also in the second half of this century.

Follow-up on this longread

What measures are needed to fight wildfires that seem to get out of control every now and then? What strategies can be used to limit the increasing wildfire risk? These questions will be answered in a follow-up article on the ClimateChangePost next week.