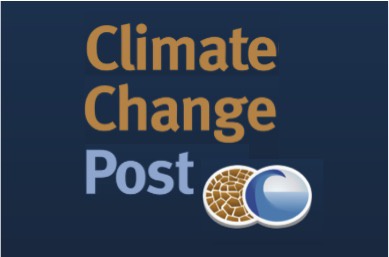 What has recently been published on climate change in the media worldwide? These are some of the headlines. Please turn to our links underneath the map of Europe on our homepage for the full stories.

A surge in major wildfire events in the western United States as a consequence of climate change will expose tens of millions of Americans to high levels of air pollution in the coming decades. By mid-century more than 82 million people will experience “smoke waves,” or consecutive days with high air pollution related to fires.

Ski and snowboarding resort operators around the world are increasingly focused on "weatherproofing" their businesses as climate change threatens their supply of fresh powder. In Australia and parts of Europe, some mountain resorts are going even further to try to hold on to skiing. They're making equipment to ski on dry slopes made of carpet-like textures or plastic.

Solar tiles are being developed to generate solar-powered electricity on roads. The developers are aiming to roll out 1000 kilometres of solar roads within five years and are scouting for 100 test sites around the world.

August 11 – INDEPENDENT: Global warming has brought a hellish heatwave to the Middle East – and it's coming to the rest of the world.

In coming decades, U.N. officials and climate scientists predict that the region’s mushrooming populations will face extreme water scarcity, temperatures almost too hot for human survival and other consequences of global warming. If that happens, conflicts and refugee crises far greater than those now underway are probable.

Climate change is making heat waves stronger and more frequent, air pollution worse, and allowing vector-borne diseases to expand their range. It’s also compromising our drinking water, causing more extreme weather events, and impacting our mental health. And the costs will be great: just this June, the World Health Organization estimated that in the twenty years after 2030, climate change will cause “approximately 250,000 additional deaths per year, from malnutrition, malaria, diarrhoea and heat stress.

August 11 – Deutsche Welle: How climate change is increasing forest fires around the world.

Science suggests that over the past few decades, the number of wildfires has increased, especially in the western United States. Extensive studies have found that large forest fires in the western US have been occurring nearly five times more often since the 1970s and 80s. Such fires are burning more than six times the land area as before, and lasting almost five times longer.

August 10 – The Guardian: Agriculture and overuse greater threats to wildlife than climate change.

Agriculture and the overexploitation of plants and animal species are significantly greater threats to biodiversity than climate change. Nearly three-quarters of the world’s threatened species faced these threats, compared to just 19% affected by climate change.

August 8 – The Washington Post: We’re trashing the oceans — and they’re returning the favor by making us sick.

In recent years a new sight has been drawing the attention of drivers on Alaska’s highways: bumps and cracks have scarred huge swathes of the road, with some fissures so deep a grown man can jump in and walk through them. Scientists say they’re the crystal-clear manifestation that permafrost -- slabs of ice and sediment just beneath the Earth’s surface in colder climes -- is thawing.