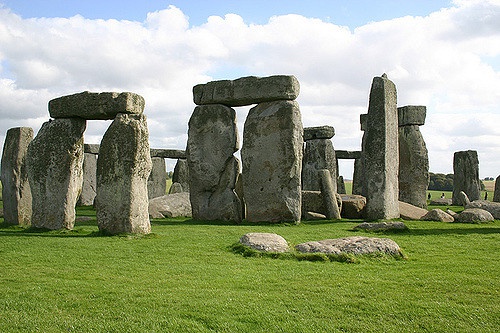 Well-known examples of UK world heritage sites that are threatened by climate change are the Neolithic monuments of the Orkney Islands off the north coast of Scotland and at Stonehenge and Avebury in southern England. These are among the most remarkable Stone Age remains anywhere in the world.

Stonehenge is the most architecturally sophisticated stone circle on the planet, and Avebury, at just more than 300 metres in diameter, is the largest. Increasing rainfall amounts, more extreme rainfall events and worsening floods are of most concern for Stonehenge. Flash floods can result in damage through gullying and wetter conditions are also expected to increase the impact of visitors walking on the site. Thirty kilometres away, extreme rainfall recently led to the River Kennet overflowing its banks and causing floods at both Avebury and Silbury Hill. Besides, warmer winters are likely to bring higher populations of burrowing mammals including badgers, moles and rabbits, which may destabilize stonework and disturb buried archaeological deposits.

More than 1 000 kilometres north on Mainland, the biggest of the Orkney Islands, lies a group of archaeological sites that make up the Heart of Neolithic Orkney World Heritage property, pre-dating Stonehenge by at least 200 years. Orkney was for centuries an important maritime centre for trade and cultural exchange going back to around 3000 BC. Because of the importance of the sea in Neolithic life in Orkney, many archaeological sites are on the coast, and at least half are under threat from coastal erosion.

The sites comprise 5.000-year-old Skara Brae, the best preserved Neolithic settlement in northern Europe and one of the top ten visitor attractions for Historic Scotland. The ruins of Skara Brae are the best-preserved Stone Age dwelling complex in Western Europe, complete with stone houses, stone furniture including seats and shelves, and archaeologically rich middens or waste heaps. Together, the monuments of the Heart of Neolithic Orkney World Heritage site offer extraordinary testament to the living conditions, material culture, and burial and ritual practices of the Stone Age farmers who arrived in Britain about 6.000 years ago. Skara Brae is the highest-profile site at risk of eventual loss from coastal erosion. A sea wall was first constructed to protect Skara Brae from erosion in 1925 and periodic improvements have been made ever since, but the coast is eroding at either end of the wall.

In Orkney, sea-level rise, the increasing frequency of storms and accelerated coastal erosion present major threats (17). Sea-level rise, increased storm frequency and intensity, and coastal erosion are major threats to coastal heritage throughout the UK. Some 17% of the UK’s coast is eroding and storm damage is expected to increase. Scotland has northern Europe’s longest coastline aside from Norway, and conservative estimates suggest that 12% of it is eroding. Of 11.500 archaeological and historic sites surveyed between 1996 and 2011, nearly a third were assessed as needing some sort of action or protection.