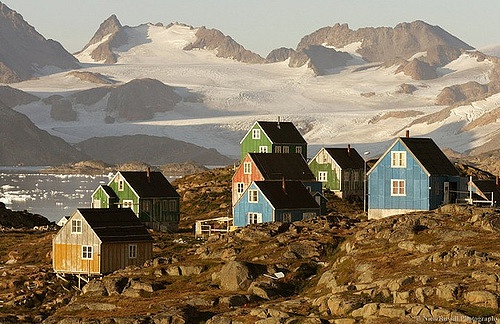 Among the world heritage sites that are threatened by climate change are sites in Greenland that are important for their archaeological evidence of early human inhabitants of Greenland. Arctic archaeological sites are extremely important globally because so much organic material, such as wood, bone, animal skins and hair, is preserved in frozen ground as the process of decay has been halted. Warming conditions in the Arctic are now rapidly leading to the loss of many archaeological resources that are vital for understanding the everyday and spiritual lives of the first peoples to live in these often inhospitable lands. Thawing permafrost, loss of sea ice leading to coastal erosion, and increasing tundra fires are putting archaeological sites and historic monuments at risk throughout the Arctic.

Already today, wooden artifacts preserved for more than 4 000 years in the permafrost but exposed to summer thaw over the last 30 years, are markedly degraded. In addition, the metabolism of bacteria actively decomposing the organic deposits in the thawing permafrost layer generates heat, which in turn accelerates the thawing of the frozen ground. Model results suggest a critical shift from a first phase of relatively slow permafrost thaw, driven by climate change and low heat production, to a second phase of accelerated permafrost thaw when water is drained and increasing oxygen availability markedly triggers a higher internal heat production. If this tipping point is reached, the heat production can accelerate decomposition and the archaeological clues that can help us understand our ancestors’ lives in Greenland could be lost forever within 80–100 years.