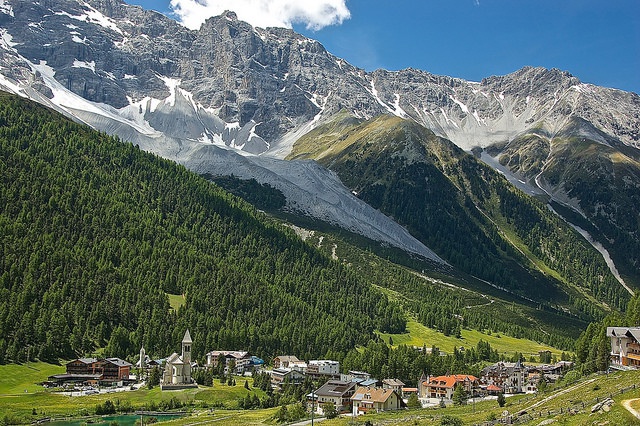 For dataset 1, organic carbon stock was quantified between 1986 and 1991, and again in 2010/2011. For dataset 2 samplings were carried out in 1976 and 2010/2011. Set 1 sampling sites are distributed over the entire German Alps, covering an area of 4,500 km2 , and include all major parent material, soil, and forest types. Set 2 comprises soils under mature Norway spruce forest and under adjacent meadow subject to extensive mountain pasture in the Berchtesgaden region, distributed over an area of 600 km2.

The results agree with projections in the scientific literature: global soil organic carbon stocks, particularly those in high-latitude or mountain ecosystems, are sensitive to climate change and are predicted to decrease in a warming climate, which may result in a positive feedback to climate change as well as in decreased productivity and ecosystem service accomplishment. The soil organic carbon losses induced by climate warming are likely to be due to accelerated microbial organic carbon decomposition with increasing soil temperature.

Across the entire data set, significant soil organic carbon stock losses were identified for sites with altitudes <1,150 m. Losses were statistically insignificant at cooler and more humid sites at altitudes >1,150 m. This difference may be (partly) due to the fact that the growth of Norway spruce (the dominating tree species at the study sites), and therefore litter production, is positively related to increased mean annual temperature only at sites >1,200 m. Therefore, at higher altitudes increased soil organic carbon losses by accelerated microbial decomposition may be partially or completely outweighed by increased litter input, whereas this was not the case at low-elevation sites.