Preparing for a risky future 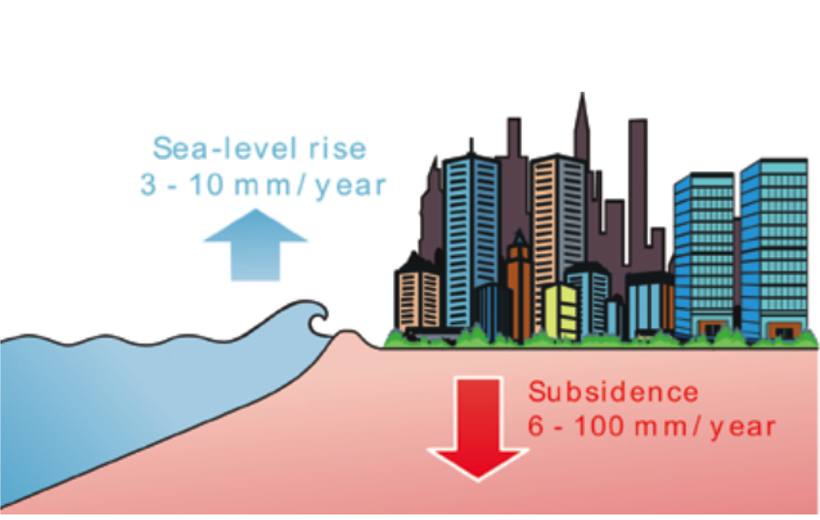 A new report from the World Bank warns that the world is ill-prepared for an increase in the number of disasters, due to climate change, rising populations and increasing vulnerability of people in large cities and badly regulated housing. The report 'The making of a riskier future: how our decisions are shaping the future of disaster risk' calls for a radical new approach to risk assessment, which takes into account extremely rapid global changes. Annual total damages from disasters have been increasing for decades and models show that by 2050, population growth and rapid urbanization could put 1.3 billion people and $158 trillion in assets at risk from river and coastal floods.

Land subsidence is one of the important factors in evolving flood hazard. In many coastal and deltaic cities, land subsidence exceeds absolute sea level rise up to a factor of ten (see table below). Deltares’ paper ‘Sinking Cities’ is included in the report as one of the case studies, showing that a new approach towards land subsidence is required, in order to cope with flood hazard in the future. Without action, parts of densely populated cities such as Jakarta, Ho Chi Minh City, Bangkok and many others will sink below sea level. Increased flood risk and damage to infrastructure due to land subsidence, costs billions of dollars per year. Annual losses in 136 coastal cities could increase from US$6 billion in 2010 to US$1,000 billion in 2070. “Unless we change our approach to future planning for cities and coastal areas, taking account of potential disasters, we run the real risk of locking in decisions that will lead to drastic increases in future losses“, said John Roome, the World Bank Group’s Senior Director for Climate Change.

Deltares additionally contributed to the report with a new framework for the global flood risk model GLOFRIS. The study shows that socioeconomic change has a greater influence than climate change on future flood risk. GLOFRIS can assess changes in flood risk on a global scale, under a wide range of climate and socioeconomic scenarios. In this way, scientists, governments and industry can determine whether flood risk may increase or reduce as a result of naturally occurring variations in the climate system as well as consistent changes.

The report was published during 2016 Understanding Risk Forum in Venice. Over 700 experts and thought leaders gathered, to share knowledge and experience, collaborate, and discuss innovation and best practice in disaster risk assessment.