The green revolution in urban drainage 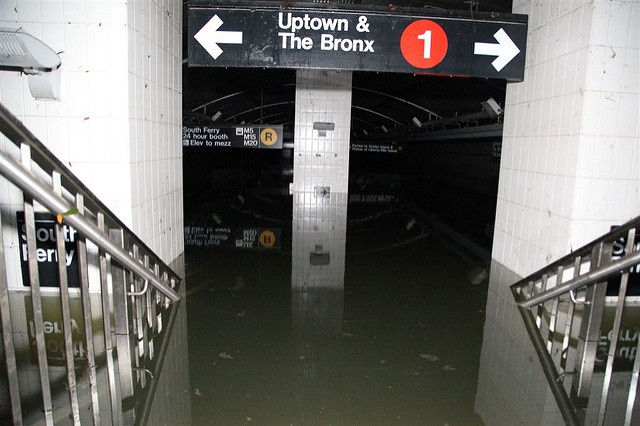 Experiences in Copenhagen, New York, London, Rotterdam and Amsterdam shared at the Adaptation Futures Conference in Rotterdam, The Netherlands, May 2016

One of the sessions at the Adaptation Futures Conference was about how to increase urban drainage systems to avoid urban flooding during cloudbursts. Focus was on adding ‘green’ to the existing infrastructure. The green revolution in progress, examples from 5 cities.

On 2 July 2011 one of the largest rainstorms ever hit Copenhagen, the capital city of Denmark. During this event, precipitation intensities of 150 mm in 2 hours were recorded at the most critical locations. The damage to the city was substantial. Insurance companies reported that > 30 % of building owners in the municipality of Copenhagen filed insurance claims after the event; the total claims exceeded 800 million euros. Researchers reported that these severe storms could occur in Copenhagen approximately every 40 years in 2100 under a high-end scenario of climate change.

In response to this cloudburst Copenhagen developed an adaptation plan to pluvial flooding that makes the urban areas more robust and reduces the risk of flooding. At the conference, Lykke Leonardsen (City of Copenhagen) presented this plan for cloudburst management.

First an assessment was made of the impact of climate change on precipitation intensity in the city: Denmark’s future will be warmer, wetter and wilder. Next, it was decided to use the existing road infrastructure to drain the water and use parks and other public space to store water. Extending the existing drainage for these amounts of rain is no option: it is too expensive. In following steps projects are implemented throughout the city. The approach will be to make the city more green and blue, more liveable. Green adaptation, Lykke called it. She also introduced the term cloudburst boulevards: streets that become streams for a few hours, where people can still drive in up to 10 cm of water. The cloudburst plan will be the backbone for physical development of the city in the next 20 years. About 300 projects will be implemented for a total amount of 1.3 billion euros. Copenhagen aims to disconnect 30% of the rainfall from the sewage system; according to Lykke this is about the maximum you can reach.

For the city of New York similar initiatives are being developed as the ones in Copenhagen. According to Alan Cohn (City of New York) the situation is different though. For New York the challenge is how to cope with a cloudburst and storm surge at the same time, like hurricane Sandy in 2012. 72% of the New York’s urban space is impervious. In most of the sewage drainage system storm water and sewage flow through the same pipe: when this system overflows during heavy downpour pathogens and other pollutants are released in public space. Another complicating factor is the fact that 48% of New York’s urban space is private development; the city has little influence to take measures over there.

Still, similar measures can be taken as the ones in Copenhagen: the remaining green can be used for its drainage function, more green spots along the streets further increase drainage, and the blacktop of school playing grounds can be replaced by grass.

The cities of Rotterdam and Amsterdam (The Netherlands) are relatively small. Both cities are taking several initiatives to ‘climate proof’ public space. Paulien Hartog en Dirk van Peijpe shared the experience and future plans for Amsterdam and Rotterdam, respectively. Like in most cities, the subsoil is too crowded to easily extend the drainage system. The solution has to be found in public and private space.

Amsterdam focuses on private properties: the city’s drainage capacity can be strongly improved by taking measures in people’s gardens. The approach is to mainstream public and private initiatives, look for shared interests of different stakeholders, and create tailor-made solutions such as ‘water-friendly gardens’ and ‘water-neutral real estate’ including green roofs in Amsterdam’s business district.

Rotterdam is a frontrunner on ‘climate proofing’ the city. It’s not just about dealing with heavy downpour, it’s also about a high level of flood protection, being a delta city. Because of the latter, Rotterdam’s approach to ‘climate proofing’ the city has to be top down. But like Amsterdam, Rotterdam aims for measures in both public and private space. The city needs to work as a sponge, water will be stored in public space temporally, and discharge capacity of the existing sewage system will be enlarged. The city’s innovative solutions, such as the realized ‘water square’, may become a showcase for the world.

London hasn’t experienced a cloudburst yet, Alex Nickson stressed, but 44.000 properties are subject to high risk of flooding and there are no results yet on reducing the risk of surface flooding. In the mean time the city’s population is growing rapidly and current drainage infrastructure is not designed for today let alone the future. The city’s drainage infrastructure was built for 2 million people in the 1950s; there are 8.6 million people living in London now. Digging extra infrastructure is not possible anymore; it is too busy in the subsoil already.

London has just published its draft sustainable action plan. The city’s target is a 1% reduction of rainwater out of the sewage system per year for the next 25 years. The plan is a long-term investment: it may take 30 years and about 2 billion Euros to have a meaningful impact on avoiding flooding at cloudburst. Green roofs are already popular in London. Alex suggested a new measure to stimulate measures in private properties: why not tax citizens for the volume of water that has to be drained of their property instead of taxing them for the water they use?