How to turn flash floods into a resource 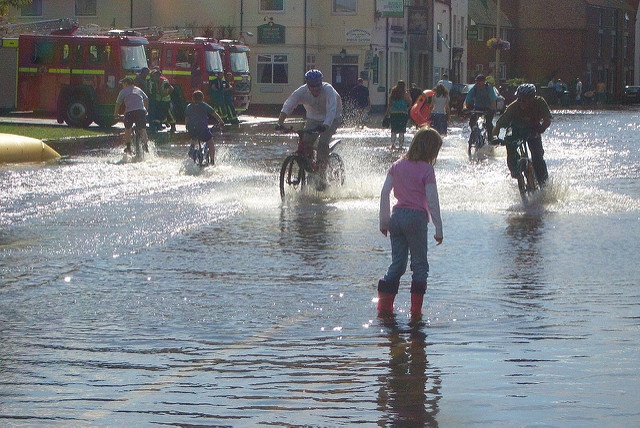 At many places climate change both increases droughts and heavy rainfall. Too little and too much water are part of the same problem. They may be part of the same solution too: by redesigning the storm water infrastructure of cities.

When it rains hard, the sudden volume of water can overwhelm urban drainage systems and lead to flash flooding. Slowing down this discharge and collecting part of it in reservoirs can overcome this. In fact, by storing it we can safe the water for the future, and we can turn troublesome storm water into a resource. Vegetation planted in and around the reservoir purifies the water because the pollutants become trapped in the soil or the roots, and contaminants are taken up by tissues or even broken down into less harmful substances. The cleaner water can then be further purified and allowed to percolate into underground aquifers beneath the city, where it can serve as a drinking-water source during droughts.

The necessary adjustments can be fit in the city’s infrastructure quite easily. By digging a trench, for instance, alongside the pavement filled with gravel and soil, and planted with trees. The trench acts as an intermediary step between the storm drain and the sewer, a sponge, and slows and purifies the runoff to protect the city. There’s an extra advantage to more trees in the cities: their shade relieves the heat during summers.

In addition to these adjustments of the urban drainage system, several other measures can be taken that strengthen these positive effects of reducing urban flooding and increasing water storage in aquifers: pervious paving increase infiltration, and green roofs capture storm water, allowing much of it to evaporate before directing the filtered excess into the city’s drainage system.