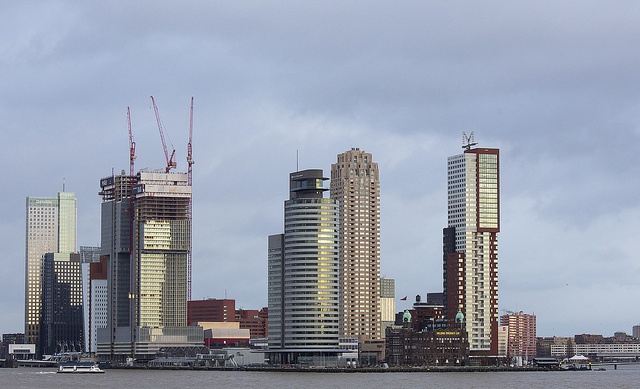 In 2007 the IPCC presented their Fourth Assessment Report. In this report they presented a map showing the most vulnerable deltas in the world. For Europe, there was only one ‘dot’: the Rhine delta, which is in fact The Netherlands. Being a Dutch flood expert, I found this map very misleading. Sure, if the coastal flood defences of the Netherlands fail, we’re in big trouble. But we know that, and that’s why we’ve made them so high and strong that they will defeat even a super storm (we hope). We shouldn’t just look at the consequences of a flood to conclude which deltas are most vulnerable. We should include flood probability, and thus flood protection infrastructure, as well.

Too often flood protection levels are left out when coastal cities are compared in terms of flood risk. That’s why I summarized a paper of Hallegatte et al. below that was published in Nature a few years ago. This paper clearly illustrates the difference between worst-case floods and vulnerability from a flood risk point of view. The data for Amsterdam and other cities around the world speak for themselves. I spend a lot of time below sea level in the Netherlands. And I don’t feel vulnerable.

You can look at flood risk in two ways: you can consider the total damage if a flood takes place or you can multiply that damage by flood probability and get average annual losses. The first metric can be viewed as a worst-case scenario. The latter presents true risk by combining probability and consequences, and thus showing the effect of flood protection to reduce flood risk. The importance of this distinction can be illustrated with the situation of the major cities in the Netherlands such as Amsterdam and Rotterdam. The worst-case damage in Amsterdam is extremely high (US$83 billion of assets exposed to a 100-year flood), but the average annual losses do not exceed US$3 million, because the city is protected by the strongest and highest flood defences that exist globally. Many other cities, on the other hand, have a much lower exposure of assets to a 100 year flood, but these cities are affected by small floods on a frequent basis due to their low level of protection, resulting in large estimated average costs.

Flood risk in terms of average annual losses, including current levels of flood protection, has been estimated for 136 coastal port cities worldwide. For all these cities combined, present aggregated average annual flood losses are estimated at approximately US$6 billion per year. Remarkably, the top 20 of cities with highest average annual losses includes 8 cities in the USA and none in Europe! Three American cities (Miami, New York City and New Orleans) explain 31% of the global aggregate losses in the 136 cities, because of their high wealth and low protection level.

An estimate has been made of changes in flood risk for these 136 cities between now and 2050. For this, assumptions were made of socio-economic changes, land subsidence and sea-level rise. Without adaptation, the projected increase in average losses by 2050 is huge, with aggregate losses increasing up to more than US$1trillion per year, depending on the assumptions made.

It is most likely, however, that cities do take measures to adapt to changing circumstances. When we assume that coastal flood defences are strengthened to maintain a constant probability of flooding, aggregate losses still increase, however: from US$6 to between US$60 and 63 billion per year, due to socio-economic change, subsidence and sea level rise. In other words, when flood probability doesn’t change due to adaptation measures, the world sees no more floods, but the consequences of floods increase and so do average annual losses. The top 20 of cities with highest average annual losses in 2050 still includes 5 cities in the USA, many cities in Asia but none in Europe.

Changes between now and 2050

The absence of European cities in these rankings doesn’t mean that Europe is not vulnerable. In fact, when we look at the increase in average annual losses between now and 2050 in relative terms, European cities do stand out: 5 cities in the Mediterranean (Marseille, Napoli, Athens, Istanbul and Izmir) are among the 20 cities for which average annual losses may increase most between now and 2050.

With respect to these results two important statements can be made: