Archaeological sites under climate change: what can be preserved, and how? 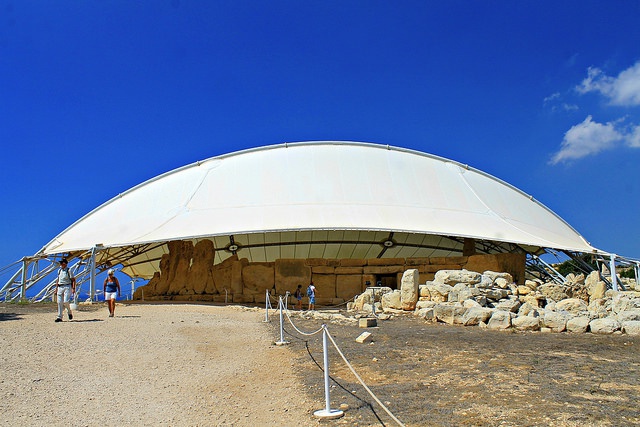 Climate change will unavoidably affect the archaeological heritage, through temperature increases, changes in humidity cycles, and increased frequency and severity of extreme events. The main players on the international scene that focus on the protection of world heritage sites are UNESCO and ICOMOS. UNESCO is one of the leading international organisations acting to safeguard cultural and natural heritage sites all over the world. Associated with UNESCO is ICOMOS, the International Council on Monuments and Sites, an international non-governmental organization to promote the conservation, protection, use and enhancement of monuments, building complexes and sites.

UNESCO and ICOMOS have drawn up recommendations on how to adapt archaeological heritage to climate change. These recommendations include the assessment of the impacts of climate change through monitoring and vulnerability assessment, and the increase of the resilience of heritage sites by reducing non-climatic sources of stress, re-designing boundaries and buffer zones, and preventive draining. Practical actions on archaeological sites can include backfilling of excavated sites and covering heritage with shelters or coatings. In addition, research, training and education, and awareness raising is needed to achieve ‘some degree of adaptation to climate change.’

Adaptation can reduce some of the adverse effects of climate change on archaeological sites, and can produce ancillary benefits, but cannot address all possible sources of damage. It has been recognised that it will not be possible to retain everything, and that ‘hard choices will need to be made about what to try to preserve and what to let go’. It has also been recognised that response to climate change needs to cater for not only extreme events, but also gradual changes, and that climate change could present opportunities as well as threats.

An example of a practical solution to protect an archaeological site is the construction of shelters over the Megalithic Temples of Malta, amongst the oldest freestanding stone buildings in the world (see photo). These Temples were being affected by rain, wind, sun, salt, pollution, and biological growth. The performance of the shelters is currently being assessed by continuing environmental monitoring which already indicates an improvement in conditions beneath the shelters when compared to conditions on site before sheltering. Environmental data show that the shelters are definitely protecting against temperature extremes, as well as great temperature fluctuations. Salt damage due to crystallisation cycles, for instance, has been attenuated because less direct water is entering the megaliths, and thus less is being absorbed both from the ground and from direct rainfall.