How to protect our cultural heritage from flooding? Experience in the Netherlands 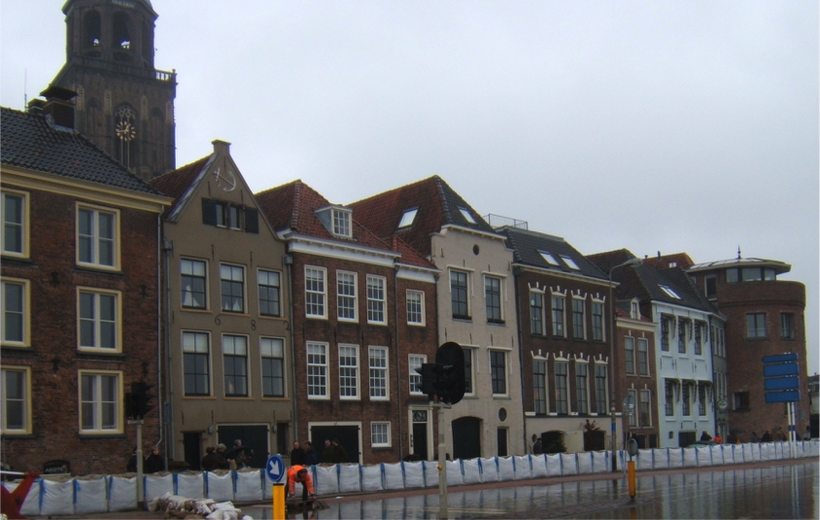 Based on several presentations at a symposium organized by the Netherlands Cultural Heritage Agency on 24 November 2016.

Climate change may pose a threat to our cultural heritage. In the Netherlands staff of museums and monumental buildings, and climate, flood and crisis management experts got together to share experiences with flood risk and extreme precipitation, and ways to protect valuable collections and buildings in times of crises. It was the first large symposium organized by the Netherlands Cultural Heritage Agency dedicated to protect collections under climate change.

In January 1995 Dutch rivers reached their highest water levels in 80 years. One of the river dikes appeared less stable than it should be. The water board could no longer vouch the safety of the dike; 250,000 people had to be evacuated.

At that time Peter Schipper was curator of three museums in the area. Many paintings of one of the museum were stored in the basement. The basement would flood if the dike were to fail. He had to act immediately. A call for help to the people of the crisis team of the local council remained unanswered. Their priority was to protect the population, not to safeguard paintings. Things got even worse: his colleagues left to evacuate their family and left Peter on his own. He called out for help on the street. For some money out of his own pocket two guys offered to help him. ‘I never got a refund for this’, Peter concludes with a smile.

The water never came. Dutch soldiers managed to secure the dike. Since then dikes have been strengthened, and the capacity of the rivers to discharge floods safely to sea has been increased by making more ‘room for the river’. One thing hasn’t changed though: many museums in the Netherlands still store valuable objects in their basements, and a lot of these basements may flood when a dike fails. In fact, several Dutch museums are located below sea level. Apparently, when building them, nobody thought about making sure that all valuable objects were stored in a flood proof manner, no matter what happens. Things seem to be changing, though: a Rotterdam museum says they are making plans for a new museum, and flood risk will be included.

Still, dikes do not protect all cultural-historical heritages from floods. Huys Amerongen, for instance, is a castle in the floodplain of one of the Rhine branches, and not protected by dikes. It was designed to sustain floods, a historic example of ‘wet proofing’.  In 1995 the water level in the castle reached 80 cm in the semi-basement. What the water left behind was cracks in wooden panels, corroded hinges, and crumbling walls and tiles.

Damage due to extreme precipitation, not an exception

There would be little reason for stress if flood risk was all Dutch museums had to worry about. Flood probability, after all, is extremely low in this country protected by ‘the world’s finest flood defence’. But dikes don’t have to fail for water to flow into a museum. During extreme precipitation water may leak from the roof, flow into the basements when groundwater level rises, or come out of the toilet when the sewer gets overloaded. It may even flow straight through the main entrance when more water collects on the street than the sewer system can handle. The latter happened on 5 May 2015 in a museum in the centre of Middelburg in the southwest of the Netherlands. The museum is one of the highest spots in the area, well above sea level. If the sea would flood this part of the Netherlands, the museum would probably be spared. But not on 5 May 2015.

Claudia Urru, Head of Operational Management of the Zeeuws Museum in Middelburg, recalls that day. It was liberation day in the Netherlands. The square in front of the museum was crowded with people celebrating a fair just for kids. Then the water started pouring down. Water collected on the square. The entrance to the museum was down the stairs, below the level of the square. Along with people, looking for shelter, the water poured down the stairs and into the museum. It was chaos. The lovely design of the low entrance appeared a weak spot for extreme precipitation. Since then, thresholds have been added to the entrance to keep the water out, and a mobile flood barrier, just in case.

The event in Middelburg was no exception. Over the last years 13 museums have experienced some damage due to water, mainly extreme precipitation. And it’s not just the collection that is in danger; it’s the building itself as well. Mould attacks walls, tiles crumble and wooden floors warp.

Police, fire brigades and army: ‘don’t count on us!’

Many museums are not prepared for the risk of flooding. They think they can rely on authorities for assistance but experience over the last years has shown that their call for help is not always answered. In the Netherlands, police, fire brigades and medical aid are organized in so-called safety regions. Henk Meijer is director of one of them. He confirms the museums’ experience. In fact, his message to museum staffs couldn’t be clearer: ‘don’t count on us to help you save your collection. If the lives of citizens are at stake, we won’t come to you. You are responsible for your own museum. We will help if we can, but there are no guarantees’. In addition, Colonel Piet Hagenaars of the Dutch army replies: ‘we can assist the safety regions in times of crises, guard museums or evacuate collections, but you will probably not be a top priority.’

Cultural heritage sector itself must act

One thing is clear: the cultural-historical sector itself must organize its preparation for flooding. Staff of museums and monumental buildings must make plans to protect, evacuate and secure valuable collections. They must form their own crisis teams and keep them trained. Preferentially together with fire brigades so they know the building in case they do have time to help.

An important element of preparing for flooding is prioritizing what to save first and what later, if time permits. This way of thinking may lead to actions one normally wouldn’t think of, such as taking the historic doors of old buildings out of their hinges and move them to a higher floor. The experts shared many more tips:

Training is essential to find the weak spots in plans and improve them. ‘We don’t have to be on our own,’ Edwin Buijsen of museum Mauritshuis in The Hague adds to this. ‘Museums and other institutes can make plans together, and agree to mobilize assistance and help one another when needed.’ Seven museums in The Hague have done this: they have formed a network for back-up when needed. This way, a situation like Peter Schipper calling out for help on the street can be avoided.

The cultural heritage sector should follow a stepwise approach in preparing for flooding, according to Agnes Brokerhof of the Netherlands’ Cultural Heritage Agency. ‘We should think in terms of risks, probability times consequences. Probability results from the source of the water , how it may reach your objects, and the means you have to avoid that. Consequences depend on the value of items that are exposed to the water. Not all your items will be equally valuable: there is a difference between treasures, core collection and support collection. It is the value of the items in combination with their vulnerability when exposed to water that determines risk; the ‘vulnerable value’. Therefore it is essential to not only value your collection or the interior of your building, but to determine their vulnerability as well. It may be wiser to save a vulnerable painting than a more valuable statue that is less vulnerable. Prioritizing is a key element of good preparation!’

Steps are now being taken by several museums to draw-up plans for saving valuable collections from extreme precipitation and flooding. Meanwhile, the impacts of climate change are already being felt. Precipitation is increasing. Janette Bessembinder of the Royal Netherlands Meteorological Institute: ‘Yearly total precipitation in the Netherlands has increased from 750 mm when I was young to 850 mm now’. The number of extreme precipitation events has increased too, in particular since 1980, and this trend will continue. With respect to coastal and river flood risk the Dutch can consult an app that tells them how high the water may rise at a certain spot during a flood, by entering their postal code. Needless to say, this offers no help for extreme precipitation. Good preparation for nasty surprises is key.