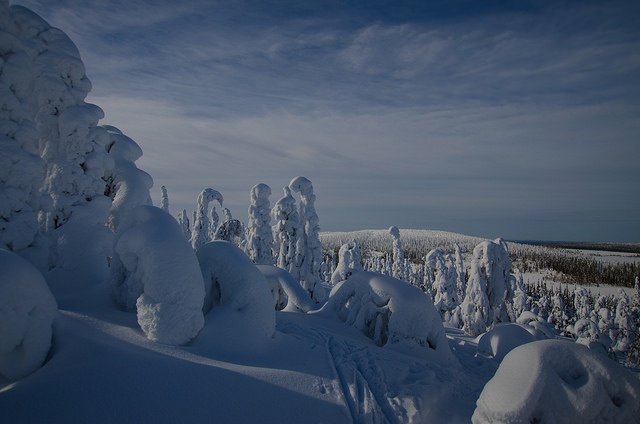 Heavy snow loads may damage forests. Trees may break or bend, and they may be uprooted when the soil is unfrozen. Trees damaged by snow are furthermore susceptible to insect attacks and other kinds of consequential damage. Snow-induced forest damage occurs frequently in Northern Europe, in central Europe and in mountainous regions such as the Alps and Pyrenees. On the European level, estimates of the amount of timber damaged by snow during a typical year vary between one and 4 million m3.

This damage may change when characteristics of winter precipitation change. It’s not just the ratio between rainfall and snow that counts, it’s also the characteristics of the snow, and hence the weight of the snow loads, that may change. With respect to forest damage, experts distinguish four different kinds of snow: rime, dry snow, wet snow and frozen snow. Accretion of heavy wet snow poses the greatest risk to forests. This type of snow attaches more effectively to tree crowns and branches when temperatures are close to freezing point at the time of precipitation. Thus, when winters get warmer in the coldest parts of Europe snow-induced forest damage may actually increase when the characteristics of the snow load changes. This effect was assessed for Finland for an intermediate and high-end scenario of climate change.

In Finland, snow damage accounts for about 7% of the total indemnities paid by insurance companies to forest owners.

The assessment shows that the impact of climate warming varies for forests in different parts of Finland. While climate becomes warmer, the annual maximum snow loads are likely to increase in eastern and northern Finland while in the southern and western parts of the country they are expected to decrease. The risk for snow-induced forest damage is likely to increase in the future in the eastern and northern parts of Finland, i.e. in the areas experiencing the coldest winters in the country. The increase is partly due to the increase in wet snow hazards but also due to more favourable conditions for rime accumulation in a future climate that is more humid but still cold enough.