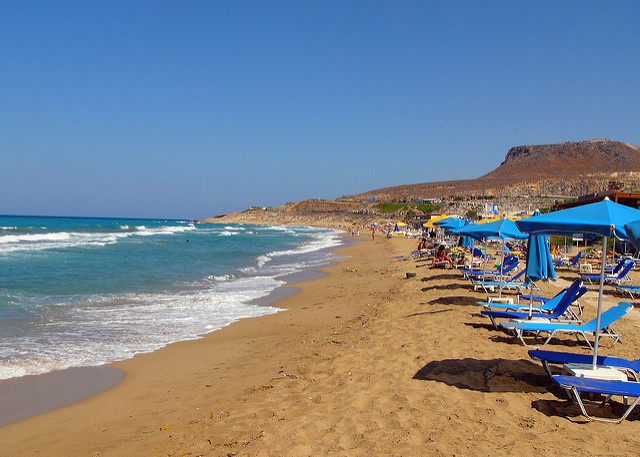 High sea level rise may be catastrophic for the beaches of Crete. Strong erosion may require costly adaptation measures to ensure their long-term sustainability.

The beaches of the island of Crete are very important for the tourism industry of Greece. The island has 21% of all hotel beds and 30% of all top luxury hotel beds in Greece. For this industry, the possible impact of sea level rise on beach erosion is a major concern. 36% of Greek beaches already suffer from erosion; island beaches appear to be particularly vulnerable, due to their small size, climatic characteristics, the high relief of their upstream drainage basins and their commonly negative sediment budgets.

With a length of 260 km and a width up to 60 km, Crete is the largest Greek island and one of the largest in the Mediterranean basin. The approximately 1,300 km long Cretan coastline shows various landforms, including rocky coasts/coastal cliffs and medium/coarse sediment beaches; about 15 % of the coastline is formed by sandy beaches.

Sea level rise may challenge the sustainability of the beach-based touristic sector through increasing beach erosion and the inundation/damage of related infrastructure. Therefore, a first (rapid) assessment of beach erosion was carried out to estimate the vulnerability of the beaches of Crete to sea level rise between now and the end of this century. This will help to develop appropriate adaptation measures that will ensure the long-term sustainability of beaches and their many ecosystem services and uses.

The assessment was carried out for the beaches of Eastern Crete. With six different models beach erosion was estimated under three scenarios of sea level rise: a low and high scenario of 0.26 and 0.82 m, respectively, between now and the period 2081 – 2100, and a ‘doom’ scenario of 1.86 m sea level rise in 2100.