70% of Europe’s flood casualties are due to flash floods, and the number of flash floods increases 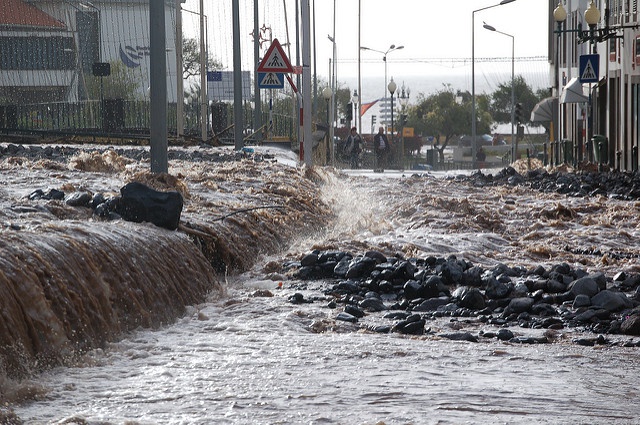 On 20 February 2010 the Portuguese island of Madeira was struck by a flash flood, with 185 mm of rain falling in one day, leading to 47 deaths and widespread damage in the capital Funchal. On the European continent, a dramatic example of a recent flash flood is the Biescas disaster in Spain in 1996, where 160 mm of rain fell in 1 hour producing a flash flood that killed 87 people in a campsite. Trends of increasing numbers of flash floods in, for instance, Spain agree with the IPCC hypothesis about the increase in both torrential events and people’s vulnerability and exposure to floods.

What are flash floods?

Although there is no single definition, a flash flood is usually defined as a sudden flood in a small catchment area (usually less than 1000 km2), occurring often within 2 hours of the start of high intensity rainfall. Over the last decades, flash floods caused on average 50 casualties per year in Europe, 70% of the total number of deaths due to floods. Trends of increasing numbers of flash floods in, for instance, Spain agree with the hypothesis formulated by the IPCC (2012, 2014) about the increase in both torrential events and people’s vulnerability and exposure to floods.

The fatalities mainly occur in countries surrounding the Mediterranean Sea, where urbanization has significantly increased population density during the last decades. The Mediterranean region is prone to flash floods, especially in the northwest, where mountain chains favour not only torrential rain concentrated in small catchments, but also heavy rainfall. The short concentration times and the extraordinary runoffs that develop can turn into catastrophic flash floods like those that occurred on 25 September 1962 in north-eastern Spain, when 815 people died in less than 5 hours. Heavy rainfall events during the summer-autumn period are the most important cause of flash floods in the Mediterranean region.

Particularly in Spain, almost 90% of the victims due to floods are caused by flash floods. In Catalonia, for instance, a region in the northeast of Spain that is particularly vulnerable to flash floods, these floods are concentrated between August and October, which is consistent with the distribution of heavy precipitation. A total of 219 floods were recorded across the region of Catalonia in the period 1981 – 2010, 11% of them have led to serious damage. Not all flash floods are equally destructive, however. A distinction has been made between 3 types of floods:

In Catalonia the number of extraordinary flash flood events shows an increasing trend for the 1900 - 2011 period. This was related to an increase of heavy, more concentrated rainfall events. Besides, the increase of exposition and vulnerability to flash floods in this area plays a role, as the population density in flash flood prone areas has increased considerably. This problem is aggravated in the summer, when some villages near the sea can go from a population of less than 1000 inhabitants to over 100,000 inhabitants. The latter affects the character of these flash floods, turning them from ‘‘ordinary or small floods” into ‘‘extraordinary” (there is no trend in “catastrophic floods” in Catalonia).