Timber production and forest protection against avalanches, rock fall and landslides in Austria under climate change 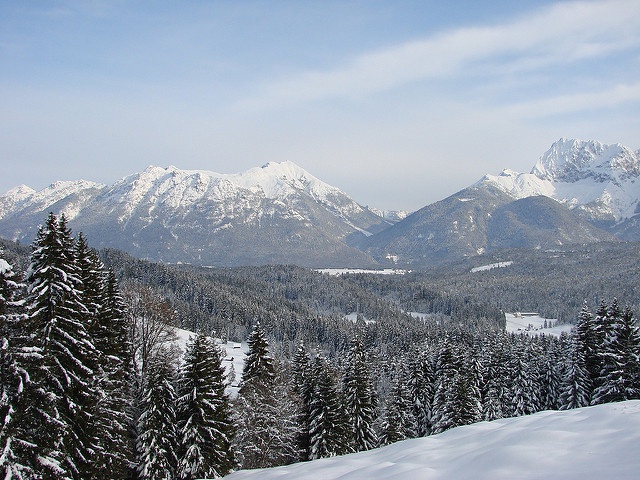 The Eastern Alps, and Mountain regions in general, provide a wide range of ecosystem services: production of timber and biomass for energy, shelter for settlements and infrastructure against gravitational natural hazards like snow avalanches, rock fall and landslides, nature, recreation, the provisioning of drinking water and the dampening of runoff peaks for hydropower production, carbon sequestration, and non-wood forest products, such as mushrooms and berries.

The impact of climate change between now and 2100 on two of these ecosystem functions, timber production and protection against landslides and avalanche release, has been evaluated for the Province of Vorarlberg in Austria, close to the Swiss border. This was done for two scenarios of climate change (compared with the reference period 1960–2000): the B1 and A1B scenarios, with annual mean temperature increases by +2.6 °C and +4 °C, respectively, until the end of the century. The impact of disturbances due to bark beetles and browsing by ungulate game species were taken into account.

The evaluation shows moderate impacts of a changing climate on European mountain forests during the first half of the twenty-first century. After 2050, however, climate change impacts are more distinct: potential timber production volumes increase, but bark beetle damage increases as well, even overtaking timber volume increment. An increase in bark beetle damage affects forest productivity, increases cost for salvage operations, and reduces timber quality. Moreover, it also adversely affects the protective function of forests against snow avalanches, rock fall and landslides by creating gaps in the forests. Under scenarios of mean annual temperature increase up to +4 °C until the end of the century, a distinct intensification of the bark beetle disturbance regime was found to be a major driver.

The results of the current contribution cannot be extrapolated to the entire European Alps, however: the forest structure of the study area, for instance, is an uneven-aged featuring rather large and old trees, whereas far stretches of the northern Alps are characterized by even-aged stands.