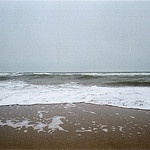 How much sea level rise is to be expected at the upper limit of current IPCC scenarios? This question has been dealt with for northern Europe, focusing on the British Isles, the Baltic Sea, and the North Sea. Probabilistic projections have been made of northern European sea level rise, including the risk and potential contribution from an Antarctic marine ice sheet collapse.

The upper limit of current IPCC climate change scenarios is the so-called greenhouse gasses emissions scenario RCP8.5. This scenario is consistent with a business-as-usual scenario. The central estimate for the projected global mean warming under this scenario by 2100 is roughly +5°C above the pre-industrial period. Projected regional sea level rise near a number of northern European cities under this scenario, including an Antarctic marine ice sheet collapse, is shown below.

Table. Regional sea level rise projections over the 21st century for cities in northern Europe (RCP8.5) for 3 uncertainty percentiles. The median projection (50%) is the best guess.

In the Baltic region, land uplift caused by glacial isostatic adjustment (GIA) is still ongoing. This is predominantly a result of the viscoelastic response of the solid Earth to the disappearance of the Fennoscandian ice sheet at the end of the last glacial period. GIA is currently responsible for lowering sea level in the Bay of Bothnia at a rate of 1 m per century.

According to this study, there is a 27% chance of local sea level in London exceeding 93 cm under RCP8.5 (and a 3% chance of exceeding 1.9 m); in the past, these high values for sea level rise in the United Kingdom were considered unlikely. Similarly, in this study a 26% chance was estimated of exceeding the previously published high-end local sea level rise scenario constructed for the Netherlands under this RCP8.5 scenario. According to this study, the dominant uncertainty in North European sea level rise is associated with the fate of Antarctica, followed by expansion of ocean waters due to warming and uncertainties in glacial isostatic adjustment.