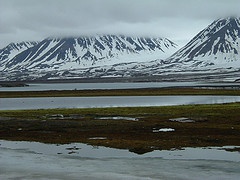 In high-latitude regions of the Earth, temperatures have risen 0.6 °C per decade, twice as fast as the global average). The resulting thaw of frozen ground exposes substantial quantities of organic carbon to decomposition by soil microbes. The permafrost region contains twice as much carbon as there is currently in the atmosphere. A substantial fraction of this material can be mineralized by microbes and converted to CO2 and CH4 on timescales of years to decades. At the proposed rates, the observed and projected emissions of CH4 and CO2 from thawing permafrost are unlikely to cause abrupt climate change over a period of a few years to a decade. Instead, permafrost carbon emissions are likely to be felt over decades to centuries as northern regions warm, making climate change happen faster than we would expect on the basis of projected emissions from human activities alone.

Abrupt permafrost thaw occurs when warming melts ground ice, causing the land surface to collapse into the volume previously occupied by ice. This process, called thermokarst, alters surface hydrology. Water is attracted towards collapse areas, and pooling or flowing water in turn causes more localized thawing and even mass erosion. Owing to these localized feedbacks that can thaw through tens of metres of permafrost across a hillslope within only a few years, permafrost thaw occurs much more rapidly than would be predicted from changes in air temperature alone.

Abrupt thaw is an important mechanism of rapid permafrost degradation, yet abrupt thaw is not included in large-scale models, suggesting that important landscape transformations are not currently being considered in forecasts of permafrost carbon–climate feedbacks. This is in part due to the fact that we do not know at this stage what the relative importance of abrupt to gradual thaw across the landscape is likely to be.