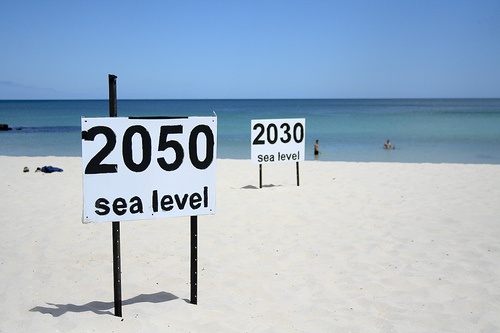 According to satellite altimetry-based data anthropogenic global warming has resulted in global mean sea-level rise of 3.3 ± 0.4 mm/year over the period 1994-2011 (1). According to a recent study, however, this previous estimate of global mean sea level rise is too high and global sea level rise over the period 1993 to mid-2014 has been between +2.6 ± 0.4 mm/year and +2.9 ± 0.4 mm/year (2). According to this same study sea-level rise is accelerating; this acceleration is in reasonable agreement with an accelerating contribution from the Greenland and West Antarctic ice sheets over this period, and the Intergovernmental Panel on Climate Change projections of acceleration in sea-level rise during the early decades of the twenty-first century of about +0.07 mm/year.  Sea-level rise varies from year to year, however, due to short-term natural climate variability (especially the effect of El Niño–Southern Oscillation): the global mean sea level was reported to have dropped 5 mm due to the 2010/2011 La Niña and have recovered in 1 year (3).