Climate and anthropogenic changes on the hydrology of an Alpine catchment 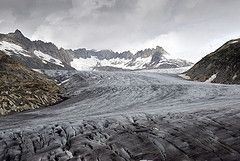 There is an elevational dependence of climate change impacts: a severe reduction in stream flow due to the missing contribution of water from ice melt at high-elevation and a dampened effect downstream.

Still, consequences for hydropower production at the upper Rhone catchment scale are possibly very significant. At the entire catchment scale a reduction of summer discharge and an increase of high flows appear to be the most significant changes to be considered by adaptation studies. However, it is unlikely that major changes in total runoff for the entire upper Rhone basin will occur in the next four decades.