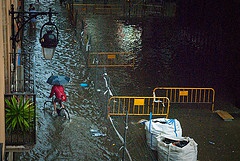 Specific individual extreme weather events cannot be attributed to climate change. It has been shown, however, that the overall probability of climate change having an effect on extreme events can be quantified by using a global aggregation of events data.

From such an analysis it was concluded that today about 75% of the moderate daily hot extremes over land are attributable to global warming. This high fraction is due to the fact that an upward shift of the temperature distribution rapidly increases the chances of temperatures in the upper tail of the undisturbed distribution. For moderate daily precipitation extremes it was concluded that 18% of these events are attributable to global warming, and this fraction is forecast to rise to about 40% when warming reaches 2 °C relative to pre-industrial temperatures.