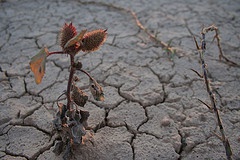 A decrease in annual precipitation of up to 1.1% per decade and an increase in the mean air temperature of up to 0.4°C per decade is projected for this part of Spain. The number of days without precipitation is projected to increase, from 325 days per year during the period 1961–1990 to 344 days per year during 2071–2099. Dry summer periods will last longer. During 1961–1990, 53% of the years showed annual precipitation to be 200–350 mm, classified as a semiarid climate. At the end of the 21st century, the years with precipitation below 200 mm per year will predominate, which corresponds to an arid climate. These results, along with the expected increase in air temperature, are indicators of climate aridification.

As a results, for both scenarios, the average groundwater recharge will decrease by 3% during (2011–2040), 8% during (2041–2070) and 17% during the last period (2071–2099) compared with the recharge during 1961–1990. The water table has already dropped more than 70 m over the last three decades. These reductions in recharge could affect dependent groundwater supplies. In this part of Spain, many small towns only use groundwater resources.