Climate change impacts on discharges of the Rhone River in Lyon 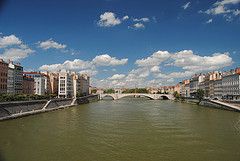 The regime of the Rhone River is strongly influenced by lake regulation and hydropower operation at the outlet of Lake Geneva. Since the construction of the dam, finalised in 1995, water level has been much more stable. The regime of the Rhone River downstream of Lake Geneva is depending on the regulation of the lake at the outlet and on discharge in the downstream tributaries.

According to climate change projections for the period 2070–2100, discharges in the Rhone basin are likely to decrease significantly by the end of the century relative to 1980–2010. Besides, seasonality of run-off will change substantially as well. At Lyon, projected reduction of mean annual flow is in the order of some 50% (both with and without a change in lake regulation at the outlet of Lake Geneva). These projections are based on a large number of global climate models and a low and high emissions scenario (RCP 2.6 and RCP 8.5). Climate change projections point to smaller discharge during low flows, but higher low flows in its sub-basins. Regarding floods, high flows exhibit a general tendency to decrease, whereas potential upwards can be observed for the more extreme, but less frequent floods.