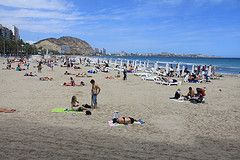 The Mediterranean is both one of the most visited tourist destinations and one of the most sensitive areas to climate change worldwide. The impact of climate change on favourable conditions for beach-based tourism in the Mediterranean has been assessed for the end of the 21st century, based on a set of regional climate models (RCMs) run under the A1B emissions scenario.

Optimal climate conditions are projected to noticeably deteriorate in summer (June, July and August) across the Mediterranean, whereas only slightly improving in north-western Europe by 2075–2094 (compared with 1990–2009). On the other hand, a general enhancement of ideal climate potential is expected for the shoulder seasons (spring and autumn) in the former region. Thus, in the Mediterranean optimal climatic conditions may shift from the present peak demand season to spring and autumn. On an annual basis, optimal climate conditions are projected to increase in Portugal, the northernmost Spanish Atlantic area and the southernmost France, whereas a general deterioration is projected for the central and eastern Mediterranean.

The overall enhancement on summery tourist comfort in north-western European countries and the overall degradation in the Mediterranean could lead to an increase of domestic holidays in the former at the expense of travelling to the latter. In previous studies it was suggested that this redistribution across European countries may be equivalent to some 14 billion euros of expenditure.

Climate change could offer new opportunities for a further extension of the beach-based activities in the Mediterranean towards late spring and early autumn. It may reduce off-season unemployment and problems such as summery peak demand in water supply or electric power. Besides, adaptation of all-year less weather-dependent types of tourism could alleviate some of the stresses during the current peak tourist demand.