Elevation-dependent warming in mountain regions of the World 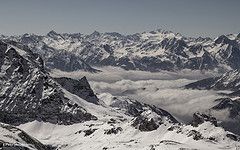 There is growing evidence that the rate of warming is amplified with elevation, such that high-mountain environments experience more rapid changes in temperature than environments at lower elevations. Elevation-dependent warming can accelerate the rate of change in mountain ecosystems, cryospheric systems, hydrological regimes and biodiversity. More rapid changes in high-mountain climates would have consequences far beyond the immediate mountain regions, as mountains are ‘water towers’ and the major source of water for large populations in lower elevation regions. Besides, mountains provide habitat for many of the world’s rare and endangered species and are therefore sensitive to environmental change.

Elevation-dependent warming may be caused by a number of mechanisms. One of them is the snow–albedo feedback. The surface absorption of incoming solar radiation increases around the retreating snowline, causing enhanced warming at that elevation. In the Swiss Alps, the daily mean 2-m temperature of a spring day without snow cover is 0.4 °C higher than one with snow cover (mean value for 1961–2012). The current snowline, which varies in elevation across different mountain ranges, is expected to retreat to higher elevations as the overall climate system warms. Other mechanisms linked to elevation-dependent warming involve clouds, water vapour and aerosols.