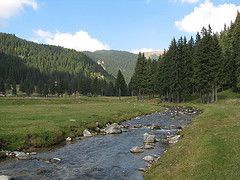 In Eastern Romania, the river discharge regime is characterized by a maximum in the spring (snowmelt) and a minimum in the autumn.

An analysis of weather data in the region over the period 1950–2006 showed a statistically significant increase of annual and summer precipitation at three out of six weather stations (an increase by 0.1 – 18% annually, and by 13 - 38 % for the summer). No significant trends were observed for spring and autumn. Four out of six weather stations showed statistically significant decreasing precipitation for the winter (a reduction by 25 - 46 %).

An analysis of discharge data over the same period for small rivers that flow into either the Prut River or the Siret River (tributaries of the Danube) showed a statistically significant increasing trend for 23 % of the analyzed rivers on an annual basis and for all seasons separately. The number of rivers with significantly increasing trends was highest (47 %) for autumn, followed by summer (29 %). Only one river showed a statistically increasing discharge trend in spring.