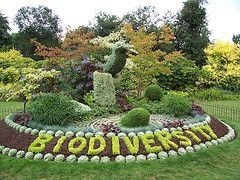 From a meta-analysis of 131 published predictions, extinction risks from climate change have been estimated for a number of global warming rates. It was concluded that climate change threatens one in six species (16%) globally if we follow our current, business-as-usual trajectory (scenario RCP 8.5, resulting in a global warming of 4.3°C). Lower percentages of species at risk due to global warming gave been calculated for lower global warming (5.2% for 2°C post-industrial global warming, 8.5% for 3°C).

Predicted extinction risks are lowest for North America and Europe, and highest for South America, Australia and New Zealand. The relative high risks for the latter regions are partly due to the fact that these regions harbor diverse assemblages of endemic species with small ranges, and are characterized by small land masses that limit shifts to new habitat. Endemic species with smaller ranges and certain taxonomic groups such as amphibians and reptiles are predicted to face greater extinction risks.

These results must be interpreted cautiously, however. In studies, important biological mechanisms that may increase or decrease predicted risks, such as species interactions, evolution, landscape dispersal barriers, habitat degradation, and intraspecific trait variation, are generally omitted.