Projected changes in hailstorms during the 21st century over the UK 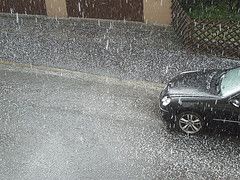 Due to climate change, a downward trend in the total number of damaging hailstorms during the 21st century was projected, from a single (regional) model simulation of future climate (the A1B medium emissions scenario). This downward trend showed statistically significant trends for hailstones with diameters between 21 and 50 mm. These results are subject to large uncertainties, however.