High-impact windstorms in Switzerland since 1859 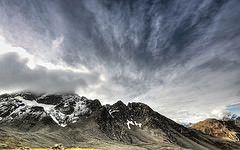 Economic losses from windstorms significantly increased in Switzerland between 1950 and 2010. Windstorms have accounted for approximately 1/3 of the total losses relating to buildings from natural hazards in Switzerland since 1950. Storms are also the main damage factor to Swiss forests. This increase is due to decadal variability.

From an analysis of quantitative (e.g., volumes of windfall timber, losses relating to buildings and descriptive (e.g., forestry or insurance reports) information on the impact of historical windstorms, a time series of high-impact windstorms in Switzerland since 1859 was reconstructed. It was concluded that storminess in Switzerland during the 20th century was high until around 1920, then low to medium until around 1970. The latest 40 years were characterized by a gradual increase from the calm 1970s to the extreme storms in the 1990s and a quieter situation since. The decadal variability is present in both the wind data (i.e., the hazard) as well as the loss and damage information.