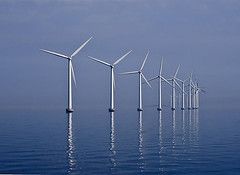 Future changes in the potential for wind power generation over the whole Europe and in the effective wind power production from national wind farms operating at the end of 2012 and planned by 2020 have been assessed. Future changes are computed as the difference between the mean values obtained for the 1971–2000 present period and the 2031–2060 and 2071–2100 future periods (based on several (regional and global) climate models under a scenario of moderate climate change (the SRES A1B emission scenario).

According to this assessment, future changes in wind power potential are weak or non-significant over a large part of Europe: changes in wind power potential will remain within ±15% and ±20% by mid and late century respectively. Changes in multi-year power production will not exceed 5% and 15% in magnitude at the European and national scale respectively for both wind farms in operation at the end of 2012 and planned by 2020. The sign of changes differs from one model to another. Therefore, climate change should neither undermine nor favor wind energy development in Europe.

Within Europe there are regional differences: a tendency toward a decrease of the wind power potential over Mediterranean areas and an increase over Northern Europe. A robust decrease in wind power is found over the Mediterranean region, with the exception of the Aegean Sea area which exhibits a robust increase. A robust increase is also highlighted over the Baltic Sea.