The end of scarcity? Water desalination as the new cornucopia for Mediterranean Spain 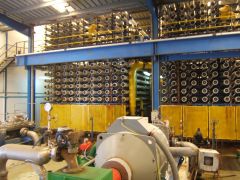 Water supply in Spain throughout the 20th century has been based on building and enlarging water infrastructure rather than focusing on demand management. After dams and inter-basin water transfers, desalination has become the new alternative for solving the differences in supply between the ‘‘dry’’ and ‘‘wet’’ parts of the Iberian Peninsula.

In 1965, the first desalination plant in Spain was built in Lanzarote (Canary Islands). Desalination is also important on the other Balearic and Canary islands, and along the Mediterranean coast, especially near Málaga (where according to some estimates, desalted water may cover up to 40% of the water needs of the Costa del Sol) and in the provinces of Murcia and Alicante.

Desalination is being presented increasingly as a techno-social fix, against the pressures of urbanization, climate change and population on freshwater resources. There is also a downside, however: negative effects on marine ecosystems, high-energy consumption and high CO2 emissions. Furthermore desalination may increase water prices, induce uncontained urban growth, shift geopolitical relations of water security and increase dependence on technical expertise as well. Desalination, finally, and as happens with other large-scale water projects, such as water transfers, may fall prey to misleading projections of water demand based on scenarios of intense agricultural, urban and tourist growth.

Over the last years, 95% of desalted water in Spain served urban and tourist purposes and only 5% went to irrigation. Desalted water is too expensive for farmers: given current energy costs, the cost of producing desalted water would be situated between 0.9 and 1 €/m3 (including all ancillary charges). The evolution of urban and tourist water consumption in the 1990s and early 2000s, on the other hand, appeared to justify the recourse to desalination. After the burst in the real estate market in 2008, however, thousands of projected new homes were cancelled making redundant the need of water and leaving some municipalities unable to comply with the agreements signed to use desalted water. The decrease in water consumption is also due to water conservation and awareness campaigns, socio-demographic changes, technical improvements in water delivery systems reducing leaks and other losses, and abundant precipitation in the last 4–5 years.

All in all, according to the Spanish Minister of Agriculture, Food and the Environment, in 2012 only 16% of the total capacity of desalination plants in Spain was actually used. Water scarcity for the urban and tourist sectors of the Spanish Mediterranean coast could be overcome with desalination. The extra capacity will not be used by farmers to offset scarcities caused by future droughts, however, because of the high price. Farmers turn to other options such as treated wastewater, water purchased from other irrigation communities, grey water reuse, rainwater harvesting, or even desalted water mixed with other water sources to decrease costs.